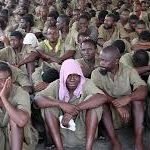 The project will reportedly begin at the Zimbabwe Prisons and Correctional Services’ Buffalo Range prison in Chiredzi, CAJ News reports.

Ivory Medical, a Harare-based company, has secured a 10-hectare piece of land at the prison because of the high security it will offer the project.

The company is reportedly preparing documents for an offer to lease 80 hectares at the remaining extension of Buffalo Range.

Zimbabwe made it legal to produce marijuana for medicinal and scientific uses last year.

So we are all aware  what Zimbabwe prisons are like