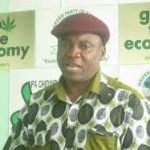 The Lusaka Times reports…….Zambia’s slim chances of having use of marijuana for medicinal purposes have been shattered after Peter Sinkamba lost the case in which he had taken the Minister of Health Dr. Chitalu Chilufya to grant him a license to cultivate the crop.

With several countries having taken that route, Mr. Sinkamba, the Green Party President was hoping the judgement would favour him and salvage the country from the jaws of increased foreign debt.

Mr. Sinkamba said legalising marijuana can generate US$36 billion annually for Zambia and that it is frustrating that many countries have seen sense in legalising the use of the crop for medicinal use when Zambia is refusing to see it.

Mr. Sinkamba sued Dr. Chilufya for refusal to grant him the license to cultivate, manufacture, distribute, export and import medical marijuana and case came up for judgement before the Court of Appeal in Lusaka this morning.

According to the Court of Appeal, Dangerous Drugs Act which is the principle Act for Administration of Dangerous Drugs section 22 gives discretion to the Minister of Health to reject or grant an application to cultivate Cannabis.

And Mr. Sinkamba said the judgement is a lost opportunity for the country to generate revenue which could have been used to pay debt and reduce poverty levels.