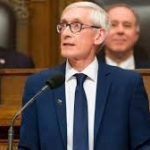 The proposal calls for allowing records to be expunged for people with previous convictions relating to marijuana possession in small amounts.

It also would permit the possession and use of a marijuana derivative used to treat seizures, CBD oil, without a doctor’s certification.

Information provided exclusively to the Wisconsin State Journal shows the outlines of Evers’ marijuana-related proposal for his budget, all of which will be released Feb. 28.

Evers previously said his budget would include a pathway to legalize medical marijuana. He previously advocated decriminalization but didn’t specify details or the manner in which he would propose it.

It is unclear if the Republican-controlled state Legislature will embrace the plan, even as public opinion increasingly favors medical marijuana and most other states permit it. Evers’ office gave an overview of the plan to the State Journal on condition it not be shared with others before publication.

The plan may face pushback from Senate Republicans, as Senate Majority Leader Scott Fitzgerald, R-Juneau, has said he opposes medical marijuana and isn’t sure such a law could pass the chamber. Some law-enforcement groups also may question the move.