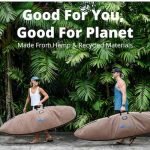 Conferees at the Hawaii Legislature on Friday struck agreement on establishing a permanent industrial hemp program in the state’s Department of Agriculture.

Senate Bill 1353, which awaits final floor votes next week, would align Hawaii with the 2018 federal Farm Act that legalized industrial hemp farming nationwide and removed hemp from the list of Schedule I controlled substances.

Reps. Sylvia Luke, Cynthia Thielen and Richard Creagan celebrated a  passage of a hemp bill Friday at the Capitol.

“This is a great day for hemp and farming in Hawaii,” Rep. Richard Creagan said in a press release. “It took lots of work but we came to an agreement.”

Creagan credited Sen. Mike Gabbard, his counterpart on ag issues, for his willingness to compromise on legislation “important not only for the hemp industry, but also for our entire agricultural community’s well-being.”

Rep. Cynthia Thielen, who has long championed hemp in Hawaii, said the bill will open hemp farming “to all of Hawaii’s farmers who can now apply for permits.”