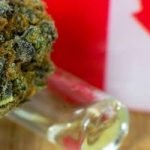 Whether legalizing on a state-by-state basis or federally, there is a lot that U.S legislators can learn from weed in Canada. There is a lot that Canadian legislators have done right for the entrepreneurs and consumer. However, a few details are impeding industry growth — as well as slowing the consumer transition away from the black market.

For the consumer and the legislator looking to partake in legalized cannabis, the biggest obstacle is often price. In other words, black market weed continues to thrive, even in states that have legalized cannabis.

Much of this goes back to taxes. In addition to sales taxes, weed in Canada is taxed 10 percent or $1 per gram, and the provinces reap most of the benefits. By comparison, in California the state imposes a 15 percent sales tax, $2.75 per ounce cultivation tax and a $9.25 per ounce flower tax, according to current laws.

With relatively low taxes, legal weed in Canada is more likely to thrive and outpace the country’s preexisting black market.

The legal age for consumption in Canada is 18.

According to a recent survey, college students consume record-high amounts of cannabis. Thirty-eight percent of students between the ages of 19 and 22 report consuming weed within th past twelve months.

When the legal age of consumption is 21, as it is in most US states that have legalized cannabis, a massive segment of the youth population still turns to the black market. Though the age of consumption varies by province, it ranges between 18 and 19.

The Trudeau government currently suspends, rather than expunges, criminal records. The 500,000 Canadians with past cannabis-related changes can apply for a pardon, but there is no system in place for universal expungement.

Many US states have implemented procedures to expunge possession-related charges. Some even give priority to people with records for cannabis jobs.

Related: 5 Facts About the First-Ever Cannabis Speakeasy That Just Opened in Las Vegas

Canada’s branding and packaging requirements are too strict.

However, strict laws on branding weed in Canada are impeding buyers from identifying the right cannabis products. In California, packaging laws are in flux and expensive, especially for smaller businesses that cannot afford to lose products that don’t follow the letter of the law.

Legalize edibles from the start.

One of today’s most significant cannabis industry trends is the growth of the edibles market. Not only did CBD gummy sales increase over 900 percent in 2018 alone, but THC chocolate sales and other infused baked goods are also soaring in popularity.

Edibles are not yet legal in Canada, despite their growing popularity. Not only would legalizing edibles nationally in the U.S. give business owners another avenue for expansion, but more options would satisfy recreational consumers and medical consumers.

Related: Why Do Edibles Make You So Darn High?

Let states decide — to a point.

Several U.S. states (California and Massachusetts, for example) give counties within them the ability to tax, restrict and even ban cannabis sales. In Canada, provinces can determine certain legal factors such as:

Americans states should follow Canada’s example, allowing states the authority to restrict consumption to in-home, but not outright ban it.

What legal weed in Canada can teach American legislators.

Cannabis legalization in the U.S. will require much more political support than it currently has. However, whenever U.S. legislators do begin crafting legislation, there is a lot they can learn from Canada.

For one, Canada doesn’t overtax or over-restrict cannabis consumption. However, Canadian laws are far from perfect: edibles are still illegal, criminal records are not universally expunged, and packaging laws have yet to be ironed out.