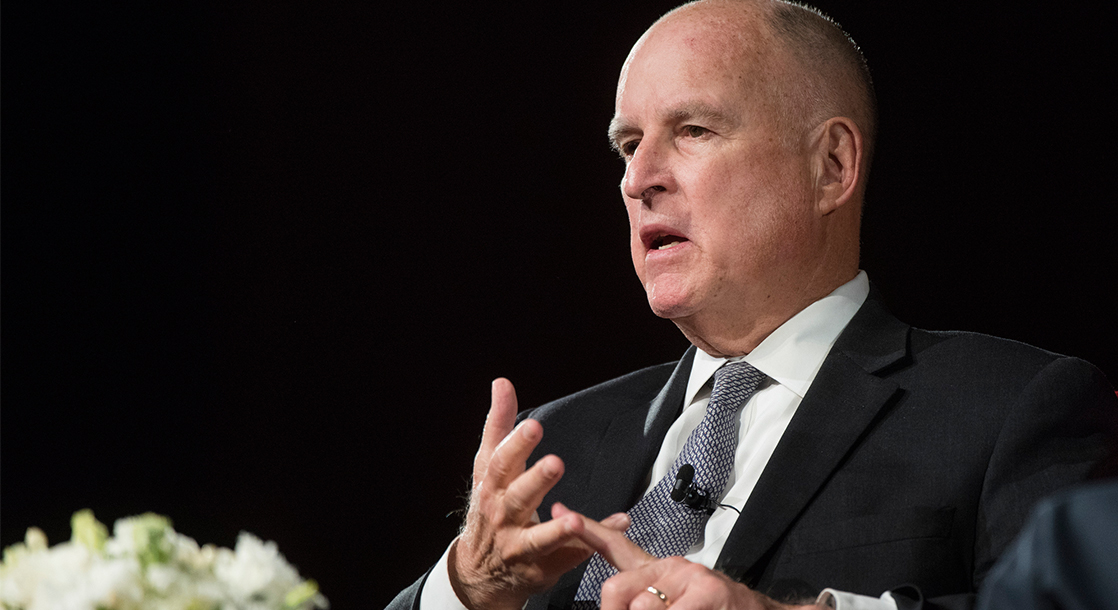 At the end of January, former California Governor Jerry Brown sat down with New York Times columnist Maureen Dowd for a wide-ranging discussion. Eventually, the subject turned to cannabis.

“Legalizing pot is about getting stoned,” Brown opined. “Nothing else, nothing more.”

Given the seemingly endless array of topics a four-term governor (of the world’s fifth-largest economy) and a Pulitzer Prize-winning journalist (for one of the world’s most prestigious papers) could’ve tackled, it was more than a little disheartening to see such tired — and patently false — rhetoric surface once more in the public sphere.

In Brown’s case, it was but the latest example in a long history of dismissive comments towards cannabis.

While much has been written about Dowd’s own infamous 2014 column detailing her negative experience with a cannabis-infused edible, it is Brown who has done more harm to the movement overall.

In 2018, he told a different New York Times reporter that when it comes to stopping oil drilling in California, “We either do nothing and smoke marijuana because it’s legalized, or we put our shoulder to the plow and do everything we can.” Beyond the borderline irrational logic on display in these quotes, the latter of the two points is perhaps the most baffling aspect of Brown’s anti-pot crusade.

With his time as governor now in the rearview, Brown could feasibly erase any memories of his anti-drug reform legacy and enhance his reputation in the fight against climate change by simply choosing not to offer fresh commentary on cannabis. Why has he instead decided to double down on his prohibition-friendly rhetoric now that he’s out of office?

As one of the first U.S. public figures to take a strong stance on climate change — Brown supported air quality regulations as early as the 1970s, and was an early adopter on the benefits of solar power — why is he not content to simply focus on the single most pressing issue of our times?

It would be one thing if Brown had served as the governor of a state with a neutral or negative stance on regulating cannabis, but instead, he was at the helm when California essentially changed the game by legalizing recreational pot when voters approved Proposition 64 in 2016. Naturally, Brown was against the bill.

In 2014, he again conflated cannabis with laziness when he spoke with NBC’s Meet the Press.

“The world’s pretty dangerous, very competitive,” Brown said. “I think we need to stay alert, if not 24 hours a day, more than some of the potheads might be able to put together.”

Before one can even wade into the logic of Brown’s argument, there’s the questionable tactic of using an antiquated term like “pothead” — an expression which connotes an addictive relationship to cannabis that has been largely disproven and one that also dismissively describes roughly 55 million adults in America. In short, it’s the kind of rhetoric one might expect from a crooked faith-based organization or deeply biased conservative pundit eager to ensure misinformation reaches the mainstream echo chamber. It’s not the words you want coming out of the mouth of a largely respected, liberal politician who was, at the time, the leader of the first state to implement a medical marijuana program.

Lest there be any confusion, Brown’s track record as governor was largely impressive. In addition to his substantial environmental advocacy, his legacy includes steadying California’s tumultuous finances, and, in his later years, embracing his role as one of President Donald Trump’s most vocal critics. In a way, this context makes his unmoveable disapproval of regulated cannabis all the more confusing.

On the cusp of his exit as governor last fall, Brown rejected a number of bills that many in the cannabis industry viewed as necessary improvements to California’s nascent regulatory framework. Among them was a bill to allow licensed cannabis retailers to deduct business expenses, a bill to permit children to access medical cannabis at school, and a bill designed to protect compassionate care programs by allowing licensed retailers to give free cannabis products to qualified medical patients.

With the far more cannabis-friendly Gavin Newsom now in office as Brown’s successor, it’s fair to suspect many of these vetoed bills may shortly find their way back to Sacramento for further consideration. Regardless, Brown’s reasoning for rejecting some of the laws above is downright appalling.

“I remain concerned about the exposure of marijuana on youth,” Brown wrote in his veto of Senate Bill 1127, “and am dubious of its use for youth for all ailments.” It’s difficult to respect Brown’s logic given the FDA approved a drug built around the active ingredient of cannabidiol (CBD) in June — three months before he vetoed SB1127.

At this point, though, Brown’s actions as California’s Governor are no longer of much concern. In fact, had he decided to let the matter rest and instead focused on lending his expertise to climate change, it would be easy enough to dismiss his past foibles on the subject of drug policy reform. Unfortunately, Brown continues to use his press interviews and public appearances to disparage cannabis — a subject on which he has shown himself to be uninformed, if not willfully ignorant. Until he is ready to change the subject — or at very least, learn more about it — Brown risks eroding his legacy by refusing to evolve.

When Maureen Dowd documented her brief lapse into madness at the hands of a infused candy bar, it didn’t send the industry reeling. Yes, putting proper dosing information on the labels of cannabis products is of vital importance, but Dowd’s column revealed more about her own psyche than any shortcoming on the part of the plant itself. The same is now true of Brown, whose words will have no ill effects on an industry that continues to grow by exponential leaps and bounds. Instead, it will serve only to establish that Brown is firmly entrenched within the final generation of politicians to genuinely believe their opinions on cannabis supercede the facts.

We’ve now reached a point where nearly every candidate harboring serious aspirations of becoming the Democratic Party’s 2020 presidential nominee has publicly endorsed federal cannabis reform. Even Republicans are starting to realize that waging wars on regulated cannabis won’t help them at the polls. As a lifelong politician, Brown must know that going against the tides of public opinion rarely pays dividends. With so much at stake — and a global age of misinformation in full swing — Brown’s valuation of his own moral high ground pale in comparison to the benefit his support (or silence) on the subject would offer.

The future is now, Jerry Brown. It’s time to accept that embracing cannabis reform and advocacy is embracing the right side of history.