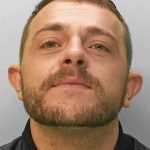 But wait…. it gets better. After a car chase through the mean streets of Worthing ( English readers will now smirk) he decided to hand himself in whereupon police found a large quantity of cannabis in his bag that he thought he could take to prison with him !

Yes it is so fantastically stupid we reprint the story in full care of UK website Lad Bible.

A drug dealer has been jailed after carelessly stamping his very own name onto his drugs. I know, you couldn’t make this shit up.

Stephen Best, 30, appeared at Brighton Crown Court on Monday 3 June following an earlier guilty plea to the possession of cannabis and four counts of possession with intent to supply drugs (cocaine, MDMA, cannabis and cannabis resin).

Sharing a mugshot of Best on Facebook yesterday, Sussex Police wrote: “This is Stephen. Stephen had a storage unit full of drugs. Stephen stamped his name onto his drugs.

“Stephen was wanted and handed himself in to police. Stephen expected to be imprisoned and took a bag. Stephen packed drugs to take to prison.

Police had been alerted to Best’s activities by Trading Standards, who were conducting a search of storage lockups in Worthing on 13 November.

After a ‘substantial amount’ of drugs were discovered, officers arrived at the scene, but Best drove off – speeding through a red light in the process.

He was later identified as the owner of the storage unit, with the Prevention Enforcement team also discovering he owned a yacht at Brighton Marina.

But that wasn’t it.

After the storage unit and boat were searched by officers, on closer inspection, the name ‘Besti‘ could be seen printed on some of the cannabis resin bars.

On 27 November, Best handed himself into the police – arriving with a bag he said he’d packed in case he was remanded in custody. Only thing is, when officers searched the bagthey found a large quantity of cannabis inside.

Perhaps unsurprisingly, Best was remanded in custody, and was handed a total of 42 months in prison.

He said: “The quantity of drugs was considerable and while it is not unusual for drug dealers to set up brands of drugs, I’ve never seen someone stamp their own name into them.

“It’s quite rare as well for someone to arrange the date, time and location of their arrest and still turn up in possession of illegal drugs.