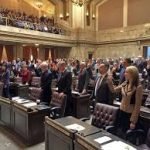 The bill, which originated in the Senate, passed the House in a 69-29 vote on Tuesday and now returns to the Senate for the reconciliation of one amendment added by state representatives. The House amendment specifies that the bill would also apply to misdemeanor cannabis convictions resulted from municipal rules in addition to those charges brought under state law.