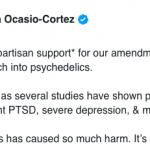 The measure moving to a full House vote, introduced by Rep. Alexandria Ocasio-Cortez (D-NY), would eliminate a long-standing rider on a spending bill that prohibits federal agencies from using funds for “any activity that promotes the legalization of any drug or other substance in Schedule I” of the Controlled Substances Act.

The congresswoman argued in a summary of her proposal that the current provision impedes valuable research into substances that have therapeutic potential such as psilocybin and MDMA. Cannabis is also listed among those substances as a Schedule I drug.

The amendment blocked from advancing to the floor, filed by Rep. Lou Correa (D-CA), would have prevented the Department of Education from denying or limiting “any funding or assistance to institutions of higher education” that allow the use or possession of medical cannabis on campus in states where it is legal.

Rep. Jim McGovern (D-MA), chair of the House Rules Committee, said last year that he was“not going to block marijuana amendments like my predecessor has done.”