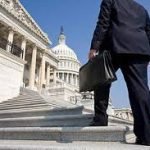 “The industry is spending millions on lobbying at the federal level, mostly on the banking issue,” said Dan Riffle, a former lobbyist with the Marijuana Policy Project who now serves as a senior policy advisor to New York Congresswoman Alexandria Ocasio-Cortez.

The industry spending easily eclipses what the traditional advocacy groups can spend, Riffle said, but “the industry is paying guys who don’t give a shit about this issue beyond the money, so they mostly don’t do anything.”

And yet the money keeps rolling in, with no sign of stopping.

According to lobbying disclosure records, a handful of cannabis trade groups spent $1.3 million lobbying Congress last year. Based on initial filings, spending in 2019 will easily surpass that amount.

In the past month, two new trade groups—the Global Alliance for Cannabis Commerce and the National Cannabis Roundtable—have filed registration papers. In addition to banking and tax reform, major cannabis businesses want to be able to ship vast oversupplies of cannabis from states suffering price crashes like Oregon to states like Louisiana, where medical weed is technically legal but not widely available.

Recently hired guns enlisted by the cannabis industry to woo their former bosses and colleagues include Nadeam Elshami, a former chief of staff for current House Speaker Nancy Pelosi, now at Brownstein Hyatt Farber Schreck, and David Schnittger, a former deputy chief of staff for ex-Speaker John Boehner now at Squire Patton Boggs, according to records.