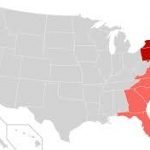 Heady Vermont are streets ahead of the rest of us with what’s happening state by state on the east coast. Tipping point is likely tp be reached by the end of this year so it is worth keeping an eye on the minutae and HV provide great info

Here’s their updates from the past week