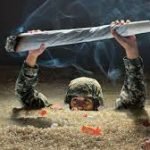 A recent story that troops and Defense Department civilians cannot hold security clearances if they invest in companies that legally sell marijuana and cannabis products has turned out to be half baked.

Federal News Radio reported on Feb. 26 that Air Combat Command had sent an email to airmen saying that they could be denied security clearances for owning stock in companies that legally sell pot products, even if they did not chose the stocks themselves.

First posted on the Air Force amn/nco/snco Facebook page, the email said the decision on the issue had come from the Department of Defense Consolidated Adjudications Facility.

“Owning marijuana related stocks is a reportable incident under the Continuous Evaluation Process,” the email said. “This must be reported and the DoDCAF will determine if the ‘involvement’ raises questions about the individual’s judgment, reliability, trustworthiness, and willingness to comply with laws, rules, and regulations, including federal laws.”

But the email posted on Facebook was not official guidance from ACC information protection, said ACC spokeswoman Leah Garton.

The command is still trying to determine who sent the email and how widely it was distributed, Garton told Task & Purpose on Tuesday.

A Pentagon spokeswoman confirmed to Task & Purpose that the DoD Consolidated Adjudications Facility had not made any policy change about owning stock in companies that legally sell marijuana or related products.

“While, currently, no official DoD guidance specific to financial involvement in marijuana exists, the department continues to research the topic,” said Army Lt. Col. Audricia Harris. “Any changes will be addressed through normal policy update procedures.”

The existing policy is outlined in a November 2014 memo from then Director of National Intelligence James Clapper, which says that anyone who disregards federal law about “the use, sale, or manufacture of marijuana” could be denied a security clearance, but does not mention investing in companies that sell marijuana products legally.

Put simply, there’s nothing currently in writing that says troops and Defense Department civilians can’t own stock in companies that legally sell marijuana products, but that doesn’t necessarily mean that’s a good idea.

“The DoD CAF adheres to applicable policies when making adjudicative determinations,” Harris said. “These determinations apply the ‘whole person concept’ and take into account all available information, favorable and unfavorable, to render an appropriate determination on a person’s reliability and trustworthiness to hold a clearance.”