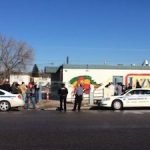 The owner of a prosperous, but unlicensed, Colorado Springs marijuana business called the Lazy Lion confessed in court that he did not pay $3.1 million in federal taxes as he should have, authorities say.

Between 2013 and August of 2016, customers could go to the store and join a private club by signing a customer agreement.  The Lazy Lion, which was never registered as a recreational dispensary, sold membership agreements to members enabling them to buy marijuana.  Members initially paid a one-time membership fee and then an entry fee thereafter, the news release said.