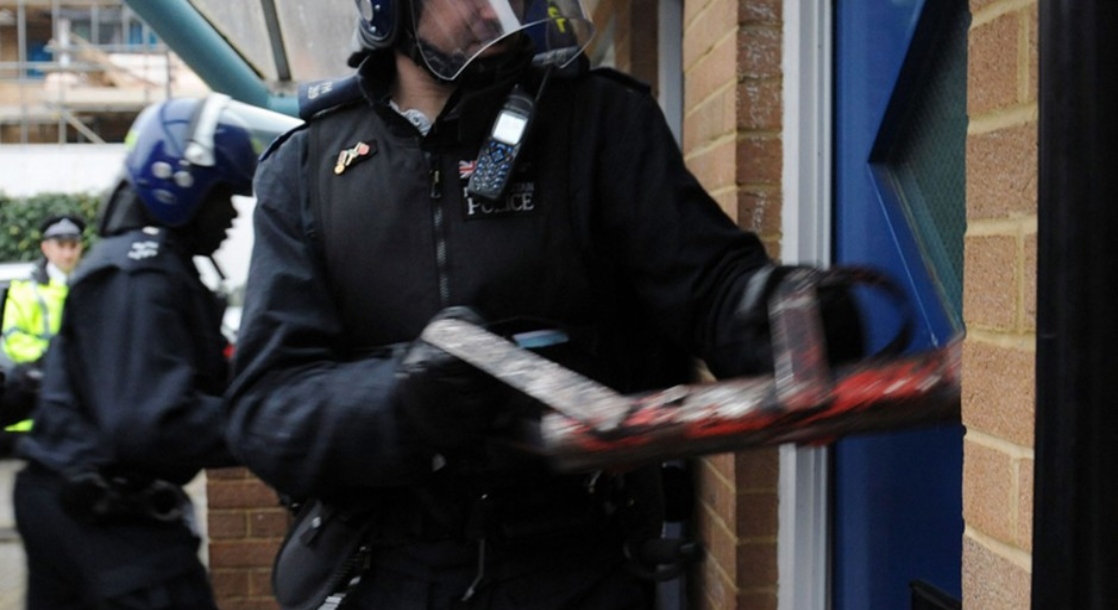 Hundreds of social media commenters are roasting British cops for bragging about sawing down a house’s front door to bust someone for possessing “half a joint.”

Last Friday, police in the industrial town of Runcorn posted a picture on their Facebook page of a front door of a house that was roughly sawn into two pieces. Along with the picture, the cops explained they executed a Misuse of Drugs Act warrant and seized “a quantity of drugs.” Within days, the post collected over 800 comments, most of them criticizing the cops for using such excessive means to make an inconsequential bust.

“So some poor lady gets her door vandalized by the police and will have to pay a fortune to get it repaired… so you could find a joint,” wrote NORML UK in response to the cops’ post. “Why are you boasting about this on social media, it makes you look mean and stupid?”

A spokesperson for the Cheshire Constabulary told the Liverpool ECHO that they did indeed use “specialist equipment” to cut down the house’s front door, and recovered a “small amount of cannabis.” The cops refused to disclose exactly how little weed they seized, however. No one was arrested during the raid, but cops said that they will interview a 58-year-old man in connection with the alleged crime.

The homeowner denied knowing there was weed in their home, telling cops it was “news to me.” The occupant said they were preparing dinner for their three-year-old daughter at the time of the bust, and added that the child is now “terrified” of entering the front room of the house. And regardless of whether or not the police end up charging anyone for weed possession, the homeowner will be forced to replace their front door at their own expense.

Police explained to the ECHO they acquired a proper search warrant for the premises, and that all of their actions were perfectly legal under UK law.

“With regards to gaining drugs warrants and forcing entry, every case is different and in this instance it was necessary to execute a drugs warrant at the address as officers had received intelligence to suggest that the premises was being used for activity involving class A drugs,” the police spokesperson said.

“By virtue of the nature of these types of offences, namely drugs supply/possession within an address, it is often necessary for officers to force entry into the premises,” the cops explained. “This is in order to gain access into the address as quickly as possible in order to prevent evidence being disposed of, as is commonly attempted. We have available to us a wide variety of methods of entry which are executed by specially trained officers.”

Even though the bust was technically legal, social media commenters still criticized the cops’ over-zealous weed enforcement. “There’s also a very good chance that [if] this person had the money to go to a private clinic they would have had THE VERY SAME PLANT prescribed,” another angry social media user commented. “The only crime being punished here is ‘being poor.’”

Indeed, recent research has found that over a million UK residents are buying black market weed for medicinal reasons, and not for recreational enjoyment. Although medical marijuana has been legal in the UK since 2018, the Home Office has only approved two cannabis medicines for limited use. Patients looking to use medicinal pot for a wider range of ailments are often forced to import their weed from Europe, at great cost.