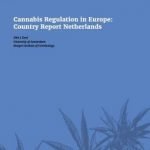 The Netherlands has long been considered a leader of progressive drug policy, but it is increasingly being left behind by policy innovations outside Europe. Nonetheless Dutch cities are leading the way towards more progressive and locally adapted cannabis policies. Produced as part of a the “New Approaches in Harm Reduction Policies and Practices” project, this Country Report seeks to understand the drivers of Dutch cannabis policy today, and the possibilities for its future.

Although cannabis is an illicit drug in the Netherlands, marijuana and hashish are openly sold in so- called ‘coffeeshops’ – thereby probably representing the most widely known example of Dutch drug policy. Originally, these coffeeshops were café-like places, where users could buy and use small amounts of cannabis. In general, this is still the case, although today some coffeeshops function more as take- away stores where one can buy, but not use cannabis.

Selling cannabis in coffeeshops is condoned, but subject to strict regulations. Coffeeshops sell cannabis to consumers from their ‘front door’, but of course this is only possible when the shops are sufficiently supplied. The supply of coffeeshops is commonly known in the Netherlands as the ‘back door’, even though in reality both suppliers and customers use the same door to enter the coffeeshop. The Dutch policy of tolerance towards coffeeshops does not apply to the back door, but this problem has been ignored for many years. In recent years, this inconsistency has become a major issue in the national debate on cannabis policy, not least because of pleas by local authorities for renewal, in particular to regulate the back door and to establish a closed circuit from cannabis cultivation to selling to consumers in coffeeshops.
Read The Full Report
cr_ned_def