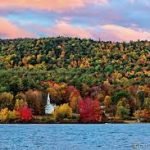 The bill would appropriate $2 million to a Cannabis Control Commission to launch administration of the law, with “priorities for the allocation of the remaining funds subject to appropriation,” starting with $100,000 annually to the Department of Safety for a drug monitoring initiative and data collection on health impacts. The remaining funds would be split:

The proposed change in how New Hampshire would tax recreational marijuana did not sit well with everyone on the committee. State Rep. Fred Doucette of Salem was one of them: “Now we’re talking clearly about a sales tax,” he said.

Matt Simon, New England Political Director of the Marijuana Policy Project, said calling it a sales tax is a dubious interpretation because the proposed retail tax is modeled after the state’s meals and rooms tax.

“Five percent tax rate on cultivators and a 9 percent tax at the retail level, and that’s somewhat lower than other states,” Simon said. “Legislators are keenly interested in eliminating the illicit market and that’s been driving this discussion.”

The House Criminal Justice and Public Safety Committee previously passed the bill, and the House sent it to Ways and Means because of the proposed tax. The House of Representatives will consider the amended bill sometime in April.

Here’s the amendment that got the bill over the hump