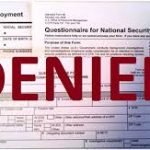 Here’s the marketwatch piece……Federal employees and contractors who simply own stocks in cannabis-related companies could have problems maintaining the security clearance required to do their jobs, experts told MarketWatch.

In one case, a Department of Defense employee who listed his marijuana-related investments on a financial disclosure form during an annual security clearance check-up was told to get rid of the shares, said Timothy Maimone, a union officer with American Federation of Government Employees Council 170.

“They basically wrote him a letter saying you’re violating the public trust by owning stock in this marijuana company,” Maimone told MarketWatch. “They gave him 30 days to fix the problem or we’ll pull your clearance.” The employee sold the shares and kept his clearance.

Using marijuana — which is illegal under federal law but legal in several states — is definitely a no-no under security clearance guidelines, which prohibit the unlawful use of controlled substances. But Maimone, whose union represents close to 9,000 Department of Defense employees worldwide, said it felt like higher-ups were “picking on” employees who are invested in marijuana-related stocks.

“Cannabis is not a problem in this country,” Maimone said. “We have more of a problem with substance abuse, yet they’re not going after people who own stock in companies that make opioids.” Employees in his union typically make about $80,000 a year, and the employee who ran afoul of clearance rules had a few hundred dollars invested in cannabis companies, he said.

The Pentagon is ‘researching’ the topic

Investing in cannabis-related companies kicked into high gear last year when Canada legalized recreational marijuana use, but the question of how it affects federal security clearances got renewed attention this month after a memo reportedly authored by DoD lawyers circulated on Facebook FB, +1.46%   and Reddit.

The memo said that U.S. Air Force officials had “received numerous inquiries regarding the purchase of marijuana related stocks.” It went on to explain that the Pentagon “treats investments in marijuana-related companies as ‘involvement,’ [in drugs] which is prohibited.”

‘If you are purposely seeking out marijuana stocks and intentionally investing in what the federal government sees as an illegal drug, you run the risk of losing your clearance.’

It added, “Owning marijuana-related stocks is a reportable incident” and DoD authorities “will determine if the ‘involvement’ raises questions about the individual’s judgment, reliability, trustworthiness, and willingness to comply with laws, rules, and regulations, including federal laws.”

But a Department of Defense official who spoke on the condition of anonymity said the memo is just one attorney’s opinion, and does not represent the Pentagon’s official stance.

In fact, there is no set DoD policy on ownership of marijuana stocks, and recent news reports on the issue have “incorrectly cited” a policy change, a DoD spokeswoman told MarketWatch.

“While, currently, no official DoD guidance specific to financial involvement in marijuana exists, the Department continues to research the topic,” said spokeswoman Lt. Col. Audricia M. Harris. “Any changes will be addressed through normal policy update procedures.” She added that security clearance investigators use what’s called the “whole person concept” when deciding whether to grant clearance. In other words, there are a number of factors that influence the decision.