For the veteran cannabis users among you, looking for that higher high, Strain Insider has curated a list of the strongest cannabis strains currently on the market. We’ll walk through tetrahydrocannabinol (THC) levels, the difference between indica and sativa blends, terpenes and flavour profiles.

It’s important to first define how strength is determined because many factors can affect the intensity of your high. These effects are typically tied to the THC levels but can also be related to a user’s physiological makeup.

Understanding these details is important for finding the perfect strain for you.

Measuring the strength of cannabis strains

The scope of this article will focus primarily on the effects that THC has on the body. Though some users have identified a ‘high’ when consuming cannabidiol (CBD), a popular non-psychoactive compound found in cannabis, it is far different from the effects of THC.

That being said, there are features beyond THC that can change the quality and strength of one’s high. Cannabis is still rather unknown scientifically, but research reports that it is the combination of flavours, freshness, conditions in which the plant was grown, the presence of chemical treatments as well as a user’s personal temperament which impart the strength of the marijuana strain’s high. Enthusiasts call this suite of characteristics the ‘entourage effect‘.

Let’s first dig into terpenes and terpenoids. These are the compounds in cannabis that contribute to its flavour profile. They aren’t unique to cannabis either. Often, terpenes are used in cocktails to enhance or change a beverage, for instance.

Related: What are Terpenes? Understanding the Cannabis Plant

The difference between terpenes and terpenoids is minor and refers to the chemical formation of each compound. Terpenoids are oxidised terpenes and are classified into different categories such as monoterpenes, diterpenes, triterpenes and many others. Oxidation is the formal term for when a compound loses electrons.

Humulene, also found in hops, adds an earthy and sometimes floral bouquet to certain cannabis strains. Limonene, as the name suggests, can add citrusy flavours to marijuana buds. What’s more, both humulene and limonene have been found to reduce inflammation and stress, respectively.

Other common terpenes include Linalool, myrcene, terpinolene, ocimene, alpha-pinene and beta-caryophyllene. Each of these compounds works in tandem to define the character and strength of a cannabis strain.

Next, it’s important to identify the differences between sativa and indica strains. Besides the clear physical distinctions between each plant, these differences also reveal themselves in the strength of your cannabis.

Related: Why You Shouldn’t Care if Your Cannabis is Sativa or Indica

Typically, sativa strains are more stimulating, cerebral, and ‘heady’. Indica strains are relaxing, physical, and offer users a potent ‘body high’ that may glue them to the couch. This rule of thumb has, however, come under criticism as of late. 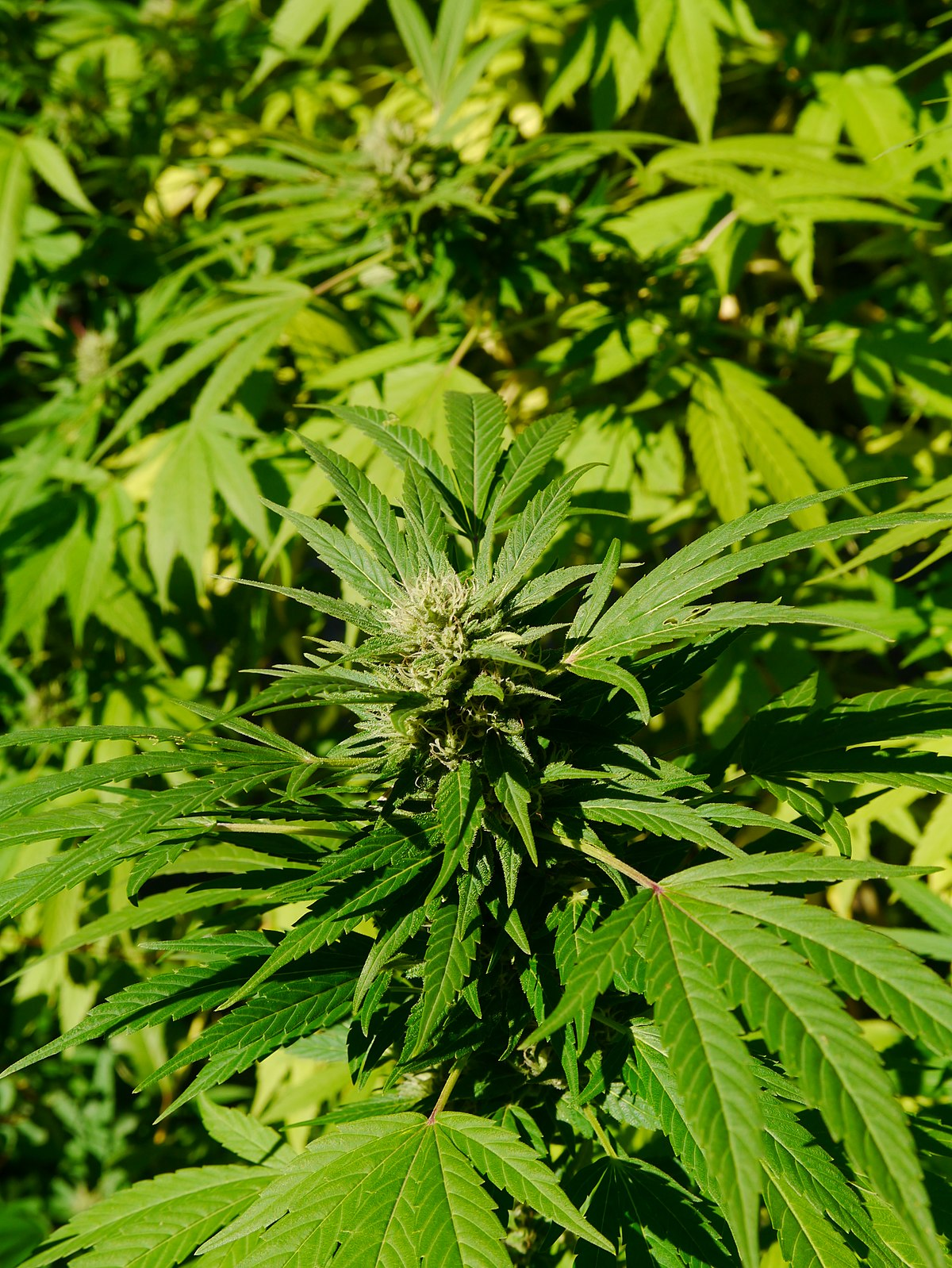 Photo of a sativa cannabis strain. These strains have much thinner leaves and taller structures than their indica counterparts. Each strain also has different growing requirements. (Source: Wikipedia)

Due to the sheer number of strains available, being able to conveniently place strains into one of two categories based on their effect makes for good marketing. The reality is, of course, far more nuanced. Dr. Ethan Russo, a neurologist working in the field of cannabis told Leafly that:

‘The clinical effects of the cannabis [strain] have nothing to do with whether the plant is tall and sparse vs. short and bushy, or whether the leaflets are narrow or broad.’

Instead, the best ways to identify the strength of a cannabis strain, as well as its potential effects on users, are THC levels and terpenes. With that in mind, it’s time to take a closer look at the strongest cannabis strains.

Bruce Banner tops the list as one of the strongest cannabis strains on the market. There are five variants of this strain, with reports of Bruce Banner #3 reaching 30 percent levels of THC. The primary terpenes are myrcene, limonene and caryophyllene, giving this bud a spicy and citrusy aroma.

As for effects, this sativa-dominant marijuana strain is preferred for ‘wake and bake’ users. Clear-headed, euphoric and energising, Bruce Banner is a great and strong cannabis strain for daily activities. It is also for these reasons that it can help users who may suffer from ADHD, bouts of depression, anxiety and stress.

That being said, the strength and THC density of this cannabis strain means it is not recommended for beginner users, as it can lead to uncomfortable paranoia.

Like Bruce Banner, Ghost Train Haze is not recommended for beginners due to its strength. A common trope for inexperienced users is that this strain can quickly lead to uncomfortable paranoia. For those up to the task, however, Ghost Train Haze has long stocked shelves in dispensaries around the world.

Noted for its density, frosty trichomes and rich flavors of pine, lemon and nutmeg due to its terpene profile, Ghost Train Haze is definitely a strong and euphoric cannabis strain. Users report an extremely cerebral high that has an added psychedelic effect.

Despite the euphoria and energy, the mental haze that this strain induces makes this bud ideal for staying close to home and relaxing. It has a THC level of 25.5 percent.

Unlike the previous two marijuana strains, Death Star can help users suffering from insomnia and agitation, as well as depression. Although it offers a slightly lower THC level at 17.5 percent, its sedative effects will keep you rooted in place (ideally somewhere cozy).

The flavour profile of Death Star has been described as diesel-like, and the dominant terpenes include caryophyllene, myrcene and limonene.

One unique feature that follows this powerful marijuana strain wherever it is smoked is its highly potent odour. Even just breaking up this bud will fill a room with a pungent aroma.

Gorilla Glue is an ultra-relaxing, strong cannabis strain weighing in at 25 percent THC. It has become a name brand strain due to its ability to sedate even the most anxious cannabis user.

It brings classic cottonmouth, giggles and foggy-mindedness to the high. It is also these points that make Gorilla Glue an ideal marijuana strain for hanging out at home and watching a movie (or some other kind of low-stimulation activity). As it is also conducive to sleepiness, staying at home makes the epic journey from the couch to the bed that much easier.

This strain also offers a very different flavour profile compared to many others on this list. Users report coffee and dark chocolate notes, with a diesel-like aftertaste.

Upbeat and highly energetic, Chemdawg is another classic wake and bake strain adored by its fans. This strain’s strength comes more from its unique high despite its relatively low THC levels at roughly 15 percent. This bud is difficult to break up by hand due to the thick resin that coats the flower.

Though it has been reported that users enjoy a pleasant body high, it is a very stimulating high that lends itself to creative activities during the day. The cerebral effects also make this cannabis strain a great choice for those with anxiety or ADHD.

The final strain on our list of strongest cannabis strains is The White. Not only does it pack a punch, but it does so with very little aroma. It is for this reason that this strain is ideal for discrete environments.

More a physical high than many of the other strains, some users smoke The White to alleviate muscle pain. Still, for beginner users, this strain can cause bouts of anxiety. This is also an ideal strain to use to make cannabis butters or oils for cooking due to its lack of typical cannabis flavours.

The user, the setting and cannabis strength

Despite the detail and recommendations found in this list, users must also be aware of their personal limits as well as the context in which they plan on consuming each of the buds on this list. Relative to the rest of the cannabis world, these six strains are all heavy hitters. The highs are intense regardless of the nuances between each strain.

Outside of being prepared with water and snacks, users shouldn’t be consuming these strains in environments where they aren’t comfortable. Naturally, this is a very subjective recommendation.

What is comfortable for one person is not for another. For beginner users looking to explore a stronger cannabis strain, the environment becomes even more important.

Concluding, marijuana has never killed anyone, but that doesn’t mean you shouldn’t work to avoid an incredibly uncomfortable experience. If you are a novice and decide to try one of these very strong cannabis strains, take it slow and get a feel for what you are getting yourself into.

In the end, words can never actually tell you how strong a cannabis strain is, you have to feel it yourself.