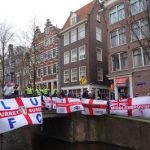 Before we get to Entreprenuer’s piece  we wonder what will happen to this, the most famous of coffeshops for idiotic Brits abroad.

While far from the most devastating consequences of Brexit, Amsterdam officials have announced that British nationals will be banned from the city’s famous cannabis coffee shops when Britain leaves the European Union. Brits could also face punishment should they purchase marijuana on the black market, reports Dutch News.

Any such drug tourism made possible by the EU’s freedom of movement rules will likely vanish for British visitors.

“When British nationals are no longer European, they will not be able to use coffee shops,” spokesman for the city council Bas‘t Aard told Dutch News. “We will roll up a massive cross-media campaign to make them aware of the fact as soon as Brexit happens.”

It appears EU officials are serious about enforcing the ban as well. Mary Jaine, a senior researcher on drugs policy in the European Union, said “the EU is considering placing portable urinals alongside passport queues so that Brits can be drug tested on entry and exit.”

Unfortunately it looks like British nationals won’t be able to fight back either. As fallout from Brexit, Brits have little legal authority to call these rules into question.

“On the face of it, they would appear to have a prima facie case under Article 2 of Protocol no. 4 to the European Convention on Human Rights which guarantees freedom of movement, but they’ve kind of scunnered themselves on that one, haven’t they?” lawyer Tjerk Meier-Kok told Dutch News.

Brits won’t be the only ones who will suffer from the ban as well. Amsterdam cannabis coffee shop owners could see their businesses fold from the lack of British consumers.

“The Brits accounted for at least 60 percent of all our customers,” said Wiett Pot, spokesman for the city’s coffee shop association. “This will have blowback throughout the weed industry.”