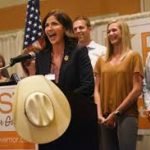 South Dakota Governor Kristi Noem on Monday vetoed a bill to legalize industrial hemp production in the state, saying it would make law enforcement’s job more difficult and could be a first step to eventually legalizing recreational marijuana.

Noem had previously opposed legalizing hemp this year but had not threatened a veto. She raised a host of objections to the bill as it was being drafted.

‘‘There is no question in my mind that normalizing hemp, like legalizing medical marijuana, is part of a larger strategy to undermine enforcement of the drug laws and make legalized marijuana inevitable,’’ Noem said in a statement along with her veto.

Earlier Monday, the House voted overwhelmingly for the bill and sent it to her. But a 21-14 vote in the Senate fell short of the two-thirds support it would need to override her veto.

Read the full story at