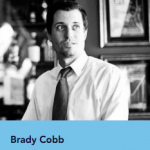 For report…….In a true-life storyline more befitting a Hollywood biopic, a man whose father was once a top pot smuggler for Pablo Escobar is an attorney and lobbyist working to flip the Washington, D.C. political establishment into supporting marijuana legalization. 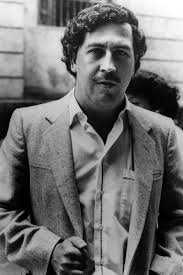 South Florida attorney Brady Cobb is the son of Clyde Walton “Bill” Cobb, who back in the 1970s and early 80s ran a huge pot smuggling operation in the Florida panhandle, using everything from shrimp boats, aircraft and old Prohibition-era moonshine routes to move more than a million pounds of Escobar’s pot. Brady Cobb estimates that before his dad was finally busted, in 1983, he had pulled in more than $300 million of Escobar’s drug money.

“The DEA couldn’t figure out at first why a bunch of rednecks in Cottondale, Florida, had 24-carat gold Rolex watches and were driving Mercedes S500’s, Cobb told Fox News in a recent interview. “They had to open a field office in Pensacola because of dad – they all got sick of driving up from Miami.”

Cobb said his father inadvertently happened into the drug business in 1976, after scoring the exclusive Fort Lauderdale to Key West distributorship for an iconic suntan lotion brand.

“Dad was a redneck, and of course he had to have three acres and a barn, even while living in Key West. The Colombians were moving a load down the road – 50,000 pounds of weed on a tractor trailer – it broke down and they saw he had a barn,” Cobb recounted. “They said they would give him $70,000 if they could throw it in there. Obviously, in 1976, it was a sizeable amount of money. And that is how he got his start in cannabis. That cannabis came right from Pablo Escobar’s Medellín.” 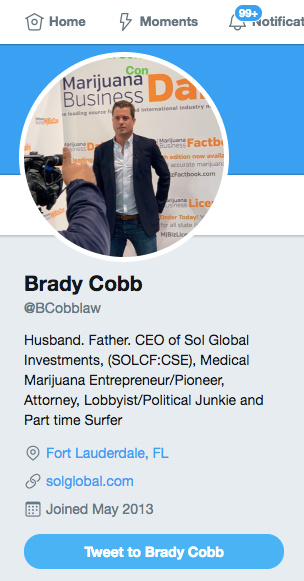 Brady Cobb has been “a key part of the conversation” in Washington as momentum supporting pot legislation has changed in recent years, according to a former White House staffer.

”Brady is a common-sense guy, who can speak to people in a way they understand. He has become a kind of off-the-record source who really want to know how this process works from the trenches and the medical uses from treating epileptic seizures to PTSD, ” the former staffer said. ”Uses outside of medical are more difficult, but Brady is key in explaining it all in a common-sense way.”

And while Cobb and others lobby federal lawmakers, there’s been movement at the state level in the last year. Three red states – Missouri, Utah, and Oklahoma – all authorizedmedical cannabis ballot measures in 2018. And in the November election, Michigan became the first Midwestern state to permit recreational pot use.

“There is no road to the White House that doesn’t involve carrying those states,” Cobb said. “All of a sudden, after that, there was interest in moving something because of those key states.”

Cobb said the effort to win over key GOP players focuses on the idea of states’ rights to make their own decisions on marijuana use. “I knew we weren’t going to convince some very conservative members on cannabis. But we could convince them on state’s rights,” he said. “As for the Democrats, it has been about tempering their expectations.”

Cobb has been recognized for his efforts to gain support for the Secure and Fair Enforcement Banking Act, which will allow pot businesses to bank freely, like any other legitimate business. “The Secure and Fair Enforcement Banking Act is a strong first step in providing legitimate cannabis related and state-licensed farmers, business, and consumers with access to an efficient and safe banking system, and traditional loans and capital markets – I appreciate Brady’s advocacy on this important legislation,” said a statement from Nikki Fried, Florida Commissioner of Agriculture.

Here’s his bio on his law firm page

Brady J. Cobb is an attorney, lobbyist, strategist and consultant based in South Florida who focuses his practice in the areas of regulated medical cannabis, Federal and State government relations and regulatory/administrative matters, commercial litigation, mergers and acquisitions and related commercial transactions. He serves as Chief Legal Officer to Liberty Health Sciences, Inc., which is one of the largest publicly traded medical cannabis companies with operations in the United States. Brady is embedded in the medical cannabis marketplace in the United States and Canada, and focuses his practice on state and federal lobbying and policy making, the development of regulatory systems and compliance with the same, complex license transfer/change of ownership transactions and related mergers and acquisitions, capital markets transactions and compliance/shareholder disclosure issues with the TSX, CSE and NASDAQ.

Mr. Cobb has taken a lead role in the current United States Federal marijuana policy reform via his extensive network of political relationships in Washington D.C. and has formed a strategic relationship with the DC based governmental relations powerhouse the BGR Group, which is headed by Fmr. Governor Haley Barbour. Brady is deeply entrenched on a daily basis in a number of pending federal policy making initiatives including: (a) the passage of the Rohrabacher-Leahy amendment in the 2018 omnibus appropriations process to afford protections to the medical cannabis marketplace from DOJ enforcement actions, (b) the development and promulgation of new FINCEN banking guidance and/or legislation to foster a more favorable banking environment for medical cannabis companies as well as opening up the credit card processing marketplace to medical cannabis companies, (c) the development and promulgation of standards and best practices by the FDA for medical cannabis products with an aim towards the de-scheduling of cannabis for medical purposes from schedule 1 to schedule 3 of the Controlled Substances Act, and (d) the long term overhaul of current federal policy towards medical cannabis from prohibition to a regulated industry with all of the attendant benefits that come with a removal from schedule 1 including banking, tax benefits, removal of the risk of prosecution for state legal actors and related benefits.

Brady has also litigated complex cases in both federal and state courts across the United States and routinely handles administrative and regulatory matters before state and local governmental agencies. He has served as lead or co-counsel in over 15 jury or non-jury trials that were held in federal and state courts, as well as serving as lead counsel in dozens of administrative and quasi-judicial final hearings before state and federal agencies. Notably, Brady has been named to Florida Super Lawyers Rising Stars since 2015 and to Florida Trend’s Legal Elite and is regularly mentioned national and statewide news publications as an medical cannabis, insurance, litigation, legislative and regulatory law expert. Prior to forming Cobb Eddy, Brady was a director at Tripp Scott, P.A. in Fort Lauderdale, Florida which is a nationally recognized law firm that specializes in governmental relations, business law, and complex business litigation. Cobb still actively participates in the political process and serves on the host committees for candidates running for federal, state or local elected office.

United States District Court for the Southern District of Florida

United States District Court for the Middle District of Florida