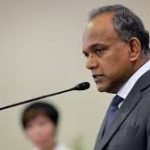 Law & Home Affairs Minister K Shanmugam says that pharmaceutical companies are hiding their intentions behind a smokescreen when it comes to cannabis. He describes the trend of accepting cannabis medical use is driven by the “power of money and propaganda”.

Mr Shanmugam said this just before a joint statement by the Home Affairs and Health ministries which set out the government’s position the use of pharmaceutical products containing cannabinoids.

The ministries clearly differentiated between pharmaceutical products with potential therapeutic uses, and products containing unprocessed or raw cannabis which they affirm have addictive and harmful properties.

They said, “To date, there are no studies which have validated the claims of unprocessed or raw cannabis being able to treat medical conditions,”

In December, Thailand became the first country in Southeast Asia to legalise the use of cannabis for medical purposes. Malaysia and the Philippines have considered following suit.

Mr Shanmugam voiced his thoughts that pharmaceutical companies are pushing a different line for financial gain, Mr Shanmugam told the programme Insight, in an episode on the implications of Thailand’s legalisation of what some term medical cannabis.

He said, “The research, in our view, is quite clear. The Institute of Mental Health (IMH) did a review of 500 articles between 1964 and 2015 on the effects of cannabis. It causes serious brain damage. One in two get addicted.”

“The companies, which are interested in making money out of this – really dealing in destruction and death – have found a new way of arguing it.”

The studies reviewed by IMH were published in medical journals and other literature by international medical bodies. The IMH concluded that “cannabis consumption is associated with irreversible brain damage, brain shrinkage and serious mental/psychiatric illnesses.

On the other hand, they found that are some medicine with cannabinoid products that are scientifically researched and medically approved. These can be administered through pharmaceutical products such as oral solutions and sprays.

There is even published research, derived from clinical trials, on the potential uses of cannabinoids to manage seizures and epilepsy, cited the ministries.

However, they iterated that such cannabinoid pharmaceuticals will have to be reviewed by the Health Sciences Authority (HSA) before they can be registered for supply in Singapore.

“Manufacturers are required to substantiate the safety, quality and efficacy of the cannabinoid pharmaceuticals based on scientific evidence from clinical studies and data on the manufacturing process,” read the joint statement.

Mr Shanmugam continued by saying that company have taken that concept – the potential medical use of cannabinoids – and labelled it as ‘cannabis is good for you for medicinal purposes’, while spending a lot of money advertising it.

“Some governments, quite frankly, then also look at the potential tax revenues. Though that’s a bum game, because I think in the states that have legalised, they find that the cost associated with increased health-related problems far outstrip any tax revenues,” he added.

The minister dismissed the case for legalising it as “full of holes” and illogical. He also described the term “medical cannabis” as a way to “whitewash the whole subject”.

“If you want medical cannabis, what you’re really saying is certain cannabinoid compounds, which are already included in some medicines, which can be prescribed… So why do you need to go from there to consuming raw, unprocessed cannabis?” he questioned.

“For a medicinal purpose, if a doctor certifies the need for a certain type of medicine that has a cannabinoid compound, there’s no problem.”

Currently, there are strict frameworks in place for the supply, prescription, and dispensing of controlled drugs for medical purposes. These drugs can have to be prescribed by a Singapore doctor for the medical condition registered with the HSA.

The ministries asserted that the policies are underpinned by research. As such, the lack of scientific evidence of the safety and efficacy of raw cannabis use supports their position that cannabis should remain an illicit drug.

Asked if a clearer distinction between support for medical and illegal drug use is needed, he replied that people would understand if it were explained, instead of being perverted to serve propaganda.

“The pharmaceutical companies can’t go out there and say: We want you to buy more drugs, and we want to make more money out of you,” he added.

“So they try and persuade you that they’re doing this to your benefit because it’s ‘medicinal’, you see. It‘s bunkum.”

The public have called out Mr Shanmugam on his comments that pharmaceutical companies are pushing a different line for financial gain when it comes to cannabis, asking why tobacco and alcohol are still widely available in Singapore when both are highly addictive and harmful substances as well