Ah, 4/20. The New Year’s Eve of weed, where tokers around the globe collectively puff all day in honor of that sweet, sweet, cheeba. Even seniors are getting in on the action — and why not? Most cannabis elders have been smoking since before the term 4/20 became code for meeting to get high. And they were the first generation of cannabis users to welcome the phrase into the lexicon and lore of weed.

But other than local efforts to shuttle residents of retirement homes to dispensaries, Baby Boomers are largely ignored in the cannabis industry’s marketing efforts. What would happen if the Most Interesting Man in the World decided to forgo Dos Equis for dabs? Research shows that seniors are the fastest growing group of cannabis users. That said, there honestly isn’t a better way for seniors to exercise their freedom than sparking up on 4/20, the highest of high holidays.

Susan Soares hasn’t been smoking that long, but the grandmother from Long Beach, California became a cannabis advocate in the ‘90s after the herb relieved her of migraine headaches resulting from a serious head injury. Soares even started a nonprofit with cannabis education as its mission and is currently raising funds to publish What’s Growing in Grandma’s Garden?, a children’s book she authored to help kids understand cannabis.

“I believe that if you grow cannabis you learn to love it even more,” she says.

4/20 weekend also happens to be the second weekend of Coachella, and Soares is throwing a desert weed-soiree. For the sixth year in a row, she is hosting the “Green Oasis,” a private estate party near the Polo Fields where Coachella performers can chill, puff, and learn about the plant. The goal of Green Oasis, Soares says, is to provide a cannabis-friendly environment for artists where they can learn about cannabis and get pampered at the same time.

“We’re doing a lot of wellness stuff,” Soares says. “We got all kinds of spa treatments, body treatments. We’re infusing the hot tub and calling it the Pot Tub.”

Soares decided to throw the Green Oasis party after realizing how 4/20 un-friendly the music festival was — and still is.

“No bro, your medical card is not valid here,” says Soares, recalling the festival website’s FAQs. Today, that portion of the frequently asked questions has been updated and notes the legalization of cannabis, but it’s just as flippant. Needless to say, the anti-weed attitude of the festival motivated her into action — and party mode.

In past years, Soares has hosted the Alabama Shakes, A$AP Rocky, The 1975, and even received visits from Kendall and Kylie Jenner.

At this year’s Green Oasis, the swag bags of cannabis are equipped with concentrates and topicals. And the party will be loaded with gourmet food and adult beverages for everyone to enjoy. But Soares says she’ll personally be celebrating at the party with an old fashion joint.

“I don’t get the same experience consuming cannabis any other way,” she says. “It’s also the easiest way to dose yourself. You know immediately where you are.”

Rich Wesdzunas, a 73-year-old retiree living in Phoenix, Arizona remembers celebrating 4/20 back in the ‘70s in California. And he’s had his share of parties for the High Holiday since then, including several years spent reveling in Amsterdam. But this year he plans to check into a hotel in town and take a break from the usual routine, which includes helping to care for his 98-year-old father-in-law. He’ll be happy to have some time without any dogs barking or cats running around.

“I’m going to take a couple days off to get away from all the craziness I go through during the week,” says Wesdzunas. “That’s going to be my way of celebrating 4/20.”

He’s been invited to a party hosted by a vape cartridge company, but says he doesn’t handle crowds well due to epilepsy. Along with two herniated discs — which he treats with medical marijuana — it’s difficult for him to stand for long periods of time.

Wesdzunas’ ties to the cannabis community go back decades. We asked him if he used to sell pot back in the day and he replied, “of course,” followed by a deep chuckle. Although he gave cultivating weed a couple of tries, he confessed that he was “never much of a grower.” These days, however, he’s partial to oils and concentrates, and even says a friend might drop by the hotel this weekend to share a dab or two. 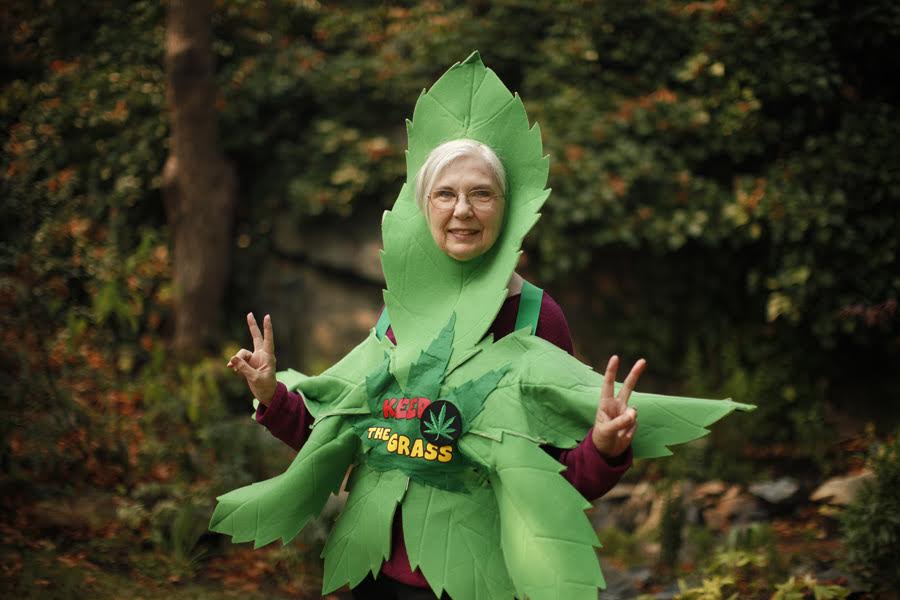 Partying with a Purpose in B.C.

Carol Francey of Victoria, British Columbia, will also be celebrating 4/20. But rather than just getting stoned, she’s planning to protest at the British Columbia legislature building. And she’s going to dress up as a pot leaf growing out of a terra cotta pot while she shares the failings of Canada’s Cannabis Act that was passed by Parliament last year.

“I’m protesting [the fact] we have more laws against cannabis now than we had before legalization,” says Francey. “There are 45 new laws and many of them will give you jail time of up to 14 years.”

“These are important things to recognize,” she says. “It looks good to say, ‘Well, you can smoke in your own home,’ and that is one relief. But it’s only if it’s government weed. You can’t buy outside of that [system].”

Francey first smoked pot in Toronto’s Yorkville in 1965. She watched hippies in the neighborhood get high for a year before taking her first puff. In those days, it was widely believed that smoking cannabis led to heroin addiction. And the stigma of being a “stoner” made her hesitant to try it. But after a year of observing stoners having a good time, she realized the plant was supremely misunderstood. That’s when she joined the cannabis community, and never looked back.

Then, after years of experiencing the plant’s benefits, Francey decided to leave her career as a kindergarten teacher and become a drug and alcohol counselor.

“I wanted to do something about the bad drug laws, and I knew I wasn’t going to be a lawyer or anything like that, but with social work, I could make a difference,” she says. “On a one-to-one basis, I could help people.”

She’s still making a difference as a retiree today, commanding a social media following that showers her posts with 500,000 likes per month, and working with activist group Sensible B.C. Francey also says her pot costume makes her an approachable messenger with the ability to change minds.

“People look at me and they can’t help it, a little smile comes over their face,” she says. “And it makes me feel great because they’re okay about this.”

Francey says she intends to incorporate plenty of pleasure into her 4/20 protest.

“People come up to me and want to take selfies and just want to be part of it to bring a little flavor to the festivities or the protest. Little kids will come up and start dancing. It’s really fun to do.”

Seniors and 21-year-olds are no different when it comes to celebrating 4/20. They may have grey hair — but they love green just as much the next generation.