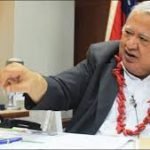 Prime Minister, Tuilaepa Dr. Sa’ilele Malielegaoi, has slammed the door on a proposal by an Australia-based company for Samoa to look into the cultivation and production of cannabis for medicinal purposes.

The proposal was made by a company called Leaf Relief based in Australia.

The Samoa Observer understands that the company wanted to negotiate with the Government about the opportunities for Samoa to cultivate cannabis with an eye on the international market.

But Tuilaepa, in a letter addressed to Reynard Muliaina of Leaf Relief, dated 11 April 2019, booted the idea to touch.

Tuilaepa informed Mr. Muliaina the idea of cultivating cannabis for medicinal purposes will not materialise in Samoa.

“Your project proposal for cannabis cultivation has been thoroughly analyzed by our officials,” Tuilaepa writes.

“Its conclusion is for Government to reject outright the cultivation of cannabis in Samoa. It may be 200 years yet before we shall ever again consider this kind of project for our peaceful Samoa.”

Attempts by the Samoa Observer to contact Mr. Muliaina for a comment were unsuccessful. Contacted, his father said he has left the county.

An email sent to Mr. Muliaina has not been responded to by press time.

It’s not the first time medicinal marijuana has surfaced in Samoa.

The idea was raised and strongly debated a few years ago with advocates calling on the Government to legalise cannabis to allow the Court to focus on other criminal matters.

Most recently, the Immigration Office refused to consider a proposal to allow international travellers to carry controlled drugs – if they are legally prescribed by an authorised person – from their home countries.

In 2017, the Samoa Law Reform Commission (S.L.R.C.) in their Drug Reform report, recommended the new drugs framework should include a provision exempting international travellers, who have been authorised to carry illegal drugs for treatment when entering Samoa, similar to Tonga and New Zealand.

“However, strict guidelines and conditions need to be in place to regulate such practice which may include the following:

– the amount to be allowed into Samoa which should be less than a month supply i.e. 30 day permit; the drug was lawfully supplied in country of origin for a certain medical condition and that it was approved by an authorised medical practitioner; and- as proof, proper medical documentation/ evidence such as a medical report must be provided certifying that the controlled drug is prescribed for treatment.”