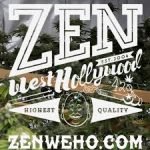 Four longstanding cannabis shops in West Hollywood were granted a reprieve on Tuesday by city officials and will be allowed to remain open until the end of the year instead of being forced to close this summer.

Under a previous decision by the city, the four existing shops – all previously medical marijuana dispensaries – did not win local business licenses in a competitive bidding process.

But according to WeHoVille.com, the West Hollywood City Council decided on a 3-1 vote to allow the four shops – Alternative Herbal Health Services, Los Angeles Patients and Caregivers Group, Zen Healing and MedMen WeHo – to remain open until Dec. 31.All four – including MedMen’s flagship store’s license – would have expired by the end of July, forcing them to close unless their permits were extended.

All four will receive extensions for their temporary retail licenses, WeHoVille.com reported.

The city granted retail licenses to eight businesses to operate in West Hollywood last year, but none of the four existing shops made the cut.