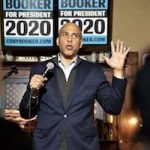 Democratic congressional members, emboldened by a freshman class that put their party in control of the U.S. House of Representatives, have pressed fast-forward on introducing progressive legislation. The Green New Deal is one example. Legalization of recreational marijuana from sea to shining sea is another.

New Jersey Sen. Cory Booker has reintroduced the Marijuana Justice Act, which he first proposed in 2017. It legalizes marijuana at the federal level, among many other sweeping changes. The chances of it passing Congress and becoming law are approximately zero — Republicans still hold a majority in the U.S. Senate and President Trump has a veto — but it should at least get a full hearing in the Democratic-controlled House. California Representatives Barbara Lee and Ro Khanna have introduced the act in the House.

Support for the Marijuana Justice Act.

Booker’s reintroduction of the Marijuana Justice Act has led to a remarkable moment in American history: a handful of presidential candidates have joined Booker in supporting national legalization of marijuana and signed on as co-sponsors of the bill. They include the following senators: Kirsten Gillibrand of New York, Bernie Sanders of Vermont, Kamala Harris of California and Elizabeth Warren of Massachusetts, (D-MA). The only senator running for the nomination who hasn’t sponsored the bill is Amy Klobuchar of Minnesota.

What does the Marijuana Justice Act do?

Booker’s bill goes much farther than any other proposal at the federal level. It accomplishes three main goals:

That’s pretty much the definition of “sweeping changes.” But it shows a strong commitment to ending and repairing the damage caused by the War on Drugs, at least where marijuana is concerned. In a news release on the Marijuana Justice Act, Booker said, “The War on Drugs has not been a war on drugs, it’s been a war on people, and disproportionately people of color and low-income individuals.”