And of course, the brand orbits around cannabis culture, too. The name High Creatives is a nod to the plant, as Jacquie has been a regular smoker since she was 12. She says weed is another main source of inspiration and the root of her artistic confidence. As she will tell you, Jacquie is decidedly a high creative. Soon, the brand will offer cannabis-friendly merch, including papers, grinders, and more. 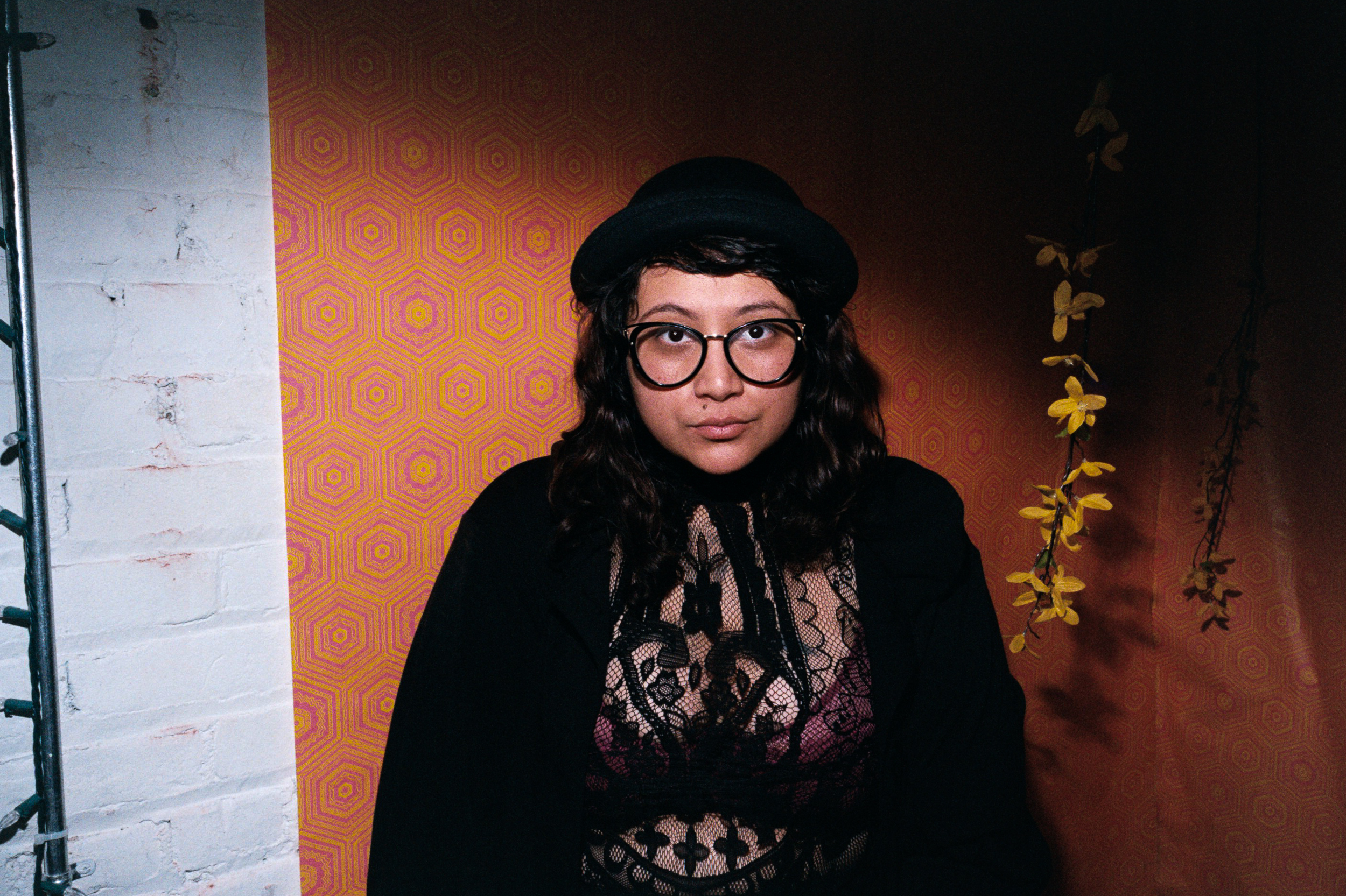 Editor’s Note: This interview has been edited for length and clarity. While MERRY JANE is not in the business of censorship, some of OK McCausland’s photos involve NSFW content that social media platforms will flag and restrict. As a result, MJ regrettably had to add pot leafs over subjects’ genitalia. To see the raw photos in all their glory, visit OK McCausland’s website here. 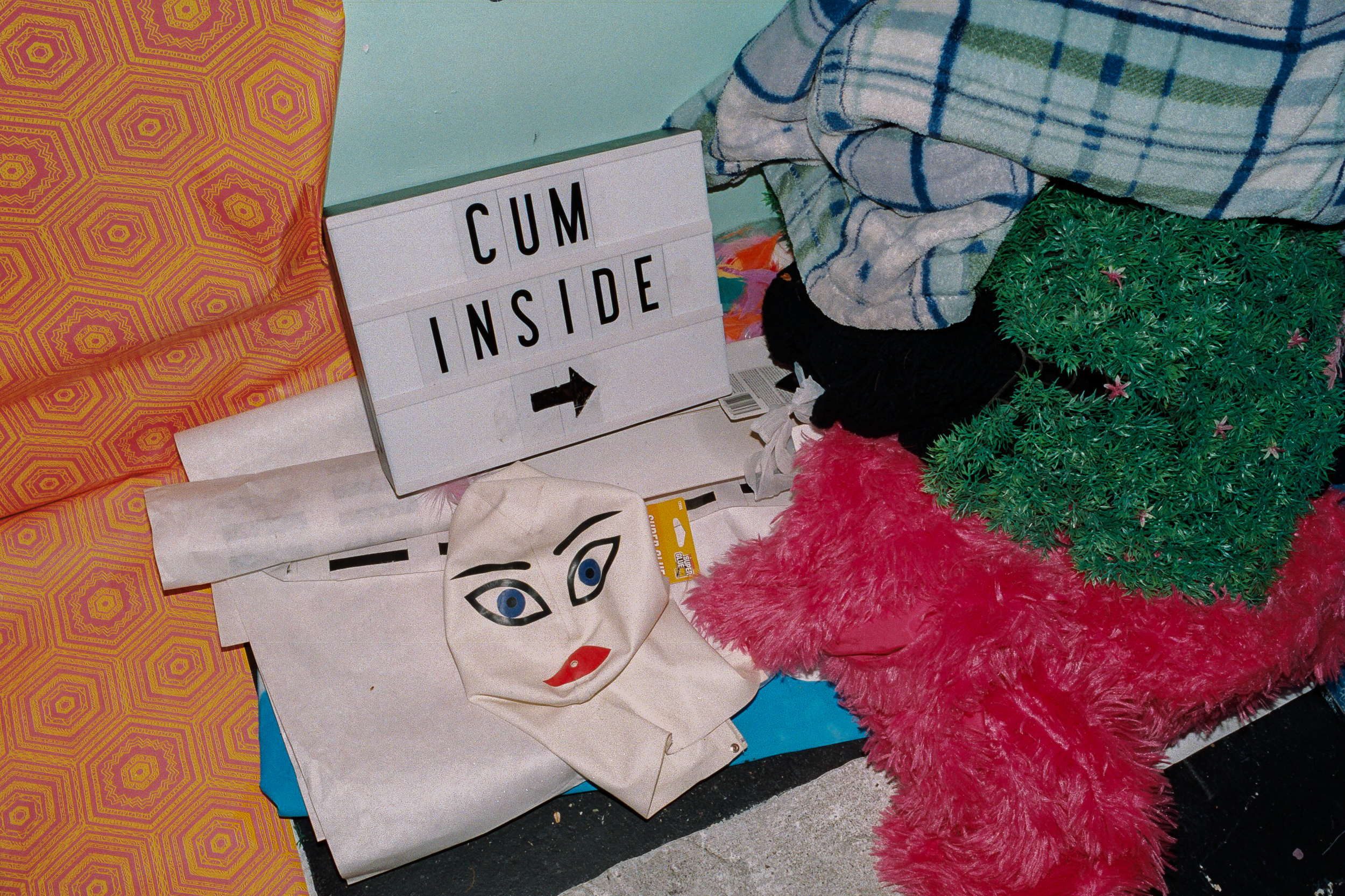 MERRY JANE: Can you tell us a little about the backstory of High Creatives?

Jacquie Ray: Well, I started the brand High Creatives in 2015. Art school took away some inspiration throughout the years, so when I graduated I wanted a change. I got a job as an assistant principal at an elementary school. It was a totally new thing — working at a school and dealing with parents. It was kind of exciting, but I got comfortable and was there for five years. I got to this point of thinking, Fuck, is this really what I want to do with my life? So I said, “Fuck it, I’m going to quit my job and start this brand.”

How did the High Creatives brand develop?

I started by photographing local bands in LA. I didn’t know anyone, but the bands really liked my work, so they started hiring me for their record release photos and album covers, as well as photographing their events.

People started recognizing the High Creatives name. I’ve been a huge weed smoker since I was twelve, and I’ve never stopped smoking. I went to college, I was an assistant principal — and I was always smoking weed. It’s made me a more creative and outgoing person, so the brand is inspired by that: being a different type of person when I’m high. So I decided to call my brand High Creatives, like being in a different state of mind.

I felt like bands weren’t the big picture of where I wanted to go, so then I started doing portraits of nudes and different body types and genders. I used it as a way to learn about myself. My family taught me that I had to go to college, have a good job, make money, get a husband. That is kind of how I felt mentally, so when I quit my job, it was a little scary but very freeing. My art was a journey of finding out who I was. So these portraits helped me love myself. At that point, I wanted to go deeper, to go back to things that caused trauma in my life like my body shape, my culture, sex — I wanted to dig deep into these topics. About a year and a half ago, I started doing small films that were very minimal, not directly [about] sex, but had to do with fetishes and kinks. And a year ago, I did my first film with sex, and it just blew up from there. 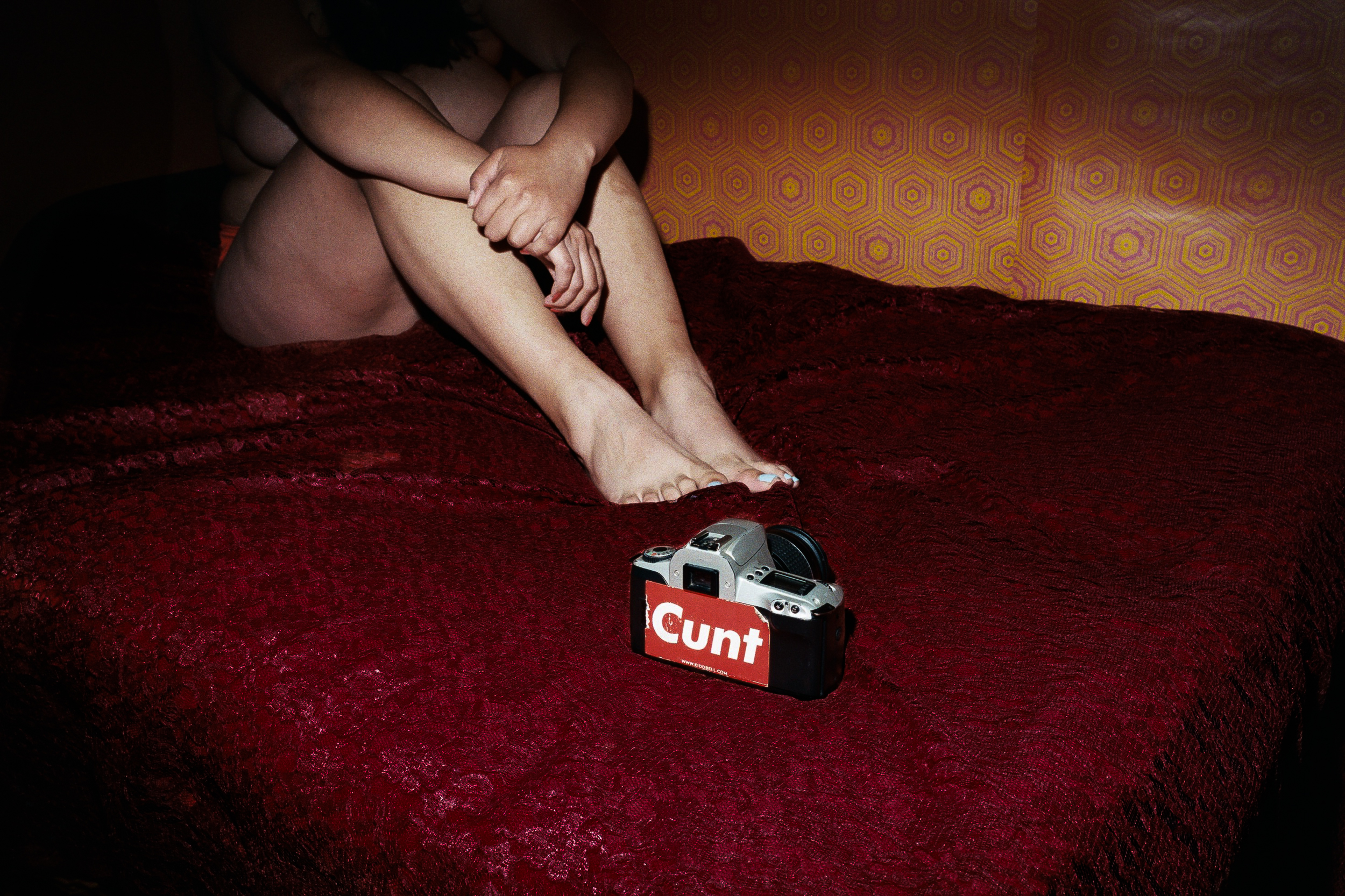 I’ve always been a revolutionary thinker, and I want to change society in some way. I feel like what I’m doing right now is in a sexual revolution; I want people to express themselves. I want to break down the power that men have over pornography and sex. I want to show that there are other ways of learning your sexual education.

Has anything changed for you since cannabis has been legalized?

It’s been freeing on a personal level, you know, not being afraid to spark up a joint in public as a brown person in LA. I could be facing criminal charges if I was caught smoking weed. Now I can use weed more freely in my films, make merchandise incorporating weed, and I’m not afraid that a law is going to stop me from selling what I want to sell. 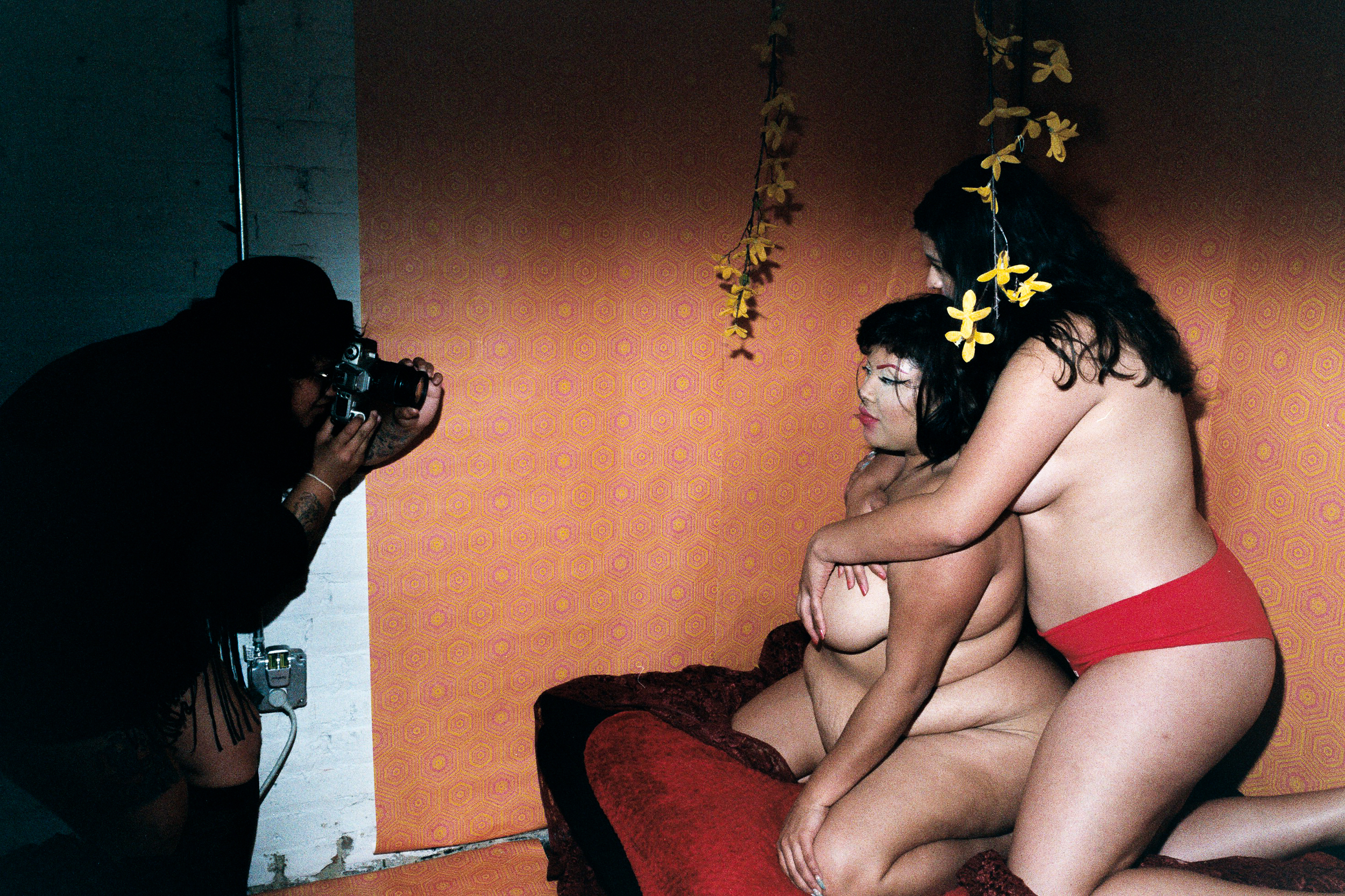 Are there any lessons to be learned from the legalization of weed and the decriminalization of sex work in the future?

I think when the government gets involved, everything gets fucked up. It’s definitely scary. I wouldn’t want sex work to be legalized, because the government will butt in. I’m all for decriminalizing. It’s work; it’s a job. With weed, as soon as the government got involved, the taxes went crazy, and the [barriers to entry] got a lot higher.

How has cannabis influenced your aesthetic?

It is my aesthetic. It helps me build my creativity, inspires ideas, makes me feel more secure in what I’m thinking. I’m shy and closed and I doubt my ideas, because I overthink what others are going to say. Weed balances all my thoughts and makes me more confident about my art and what I do with my work. 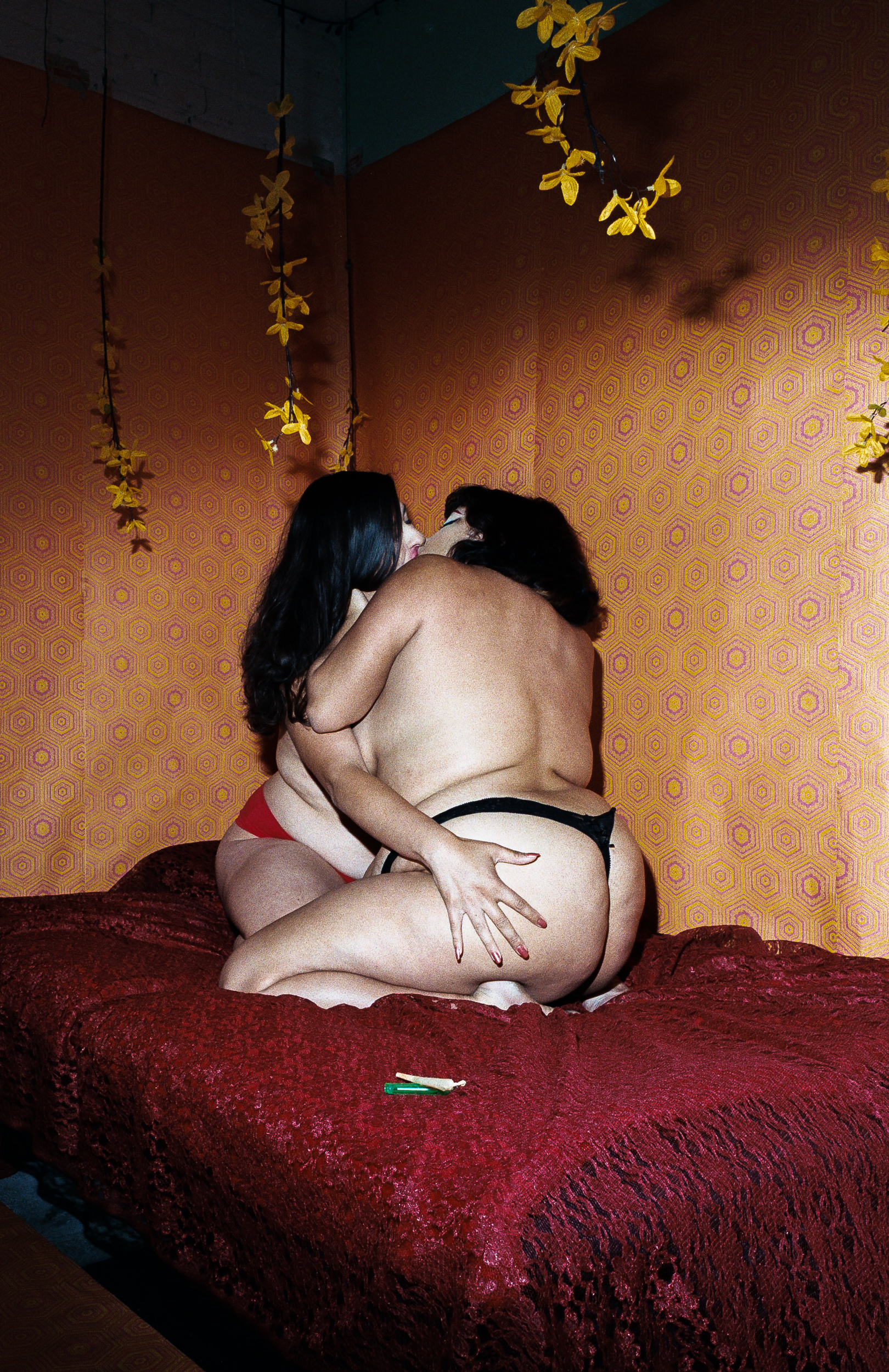 Do you incorporate cannabis into your videos very often?

I am starting to more. I want to use it because it’s part of what I’m creating — like while I’m home jotting down ideas for shoots, it’s what I do. Now that it’s legal, I feel more free about it. All of it comes from weed. I don’t require my models to smoke, though. I understand everyone reacts to weed differently.

Do you smoke in your personal sex life?

Yes. I’m always high. My partner and I are big smokers. We are specific in the papers and rollers we use — I’ve tried so many papers because I can tell what the paper does to the weed. This is why I want to incorporate [cannabis] more in my work, because weed really excites me. In the beginning, I didn’t want to come off as a “stoner,” or all these negative terms people have for cannabis users, but it’s been four years of me creating this brand and moving it forward and I’ve been high all along. So I’m like fuck, this is me…

A lot your work comes from exploring what you didn’t learn about sex growing up in a strict household. Does your family know about High Creatives?

Yes, my family is very strict. My sisters are very close-minded. The way that we were brought up, they are very family-oriented, and now they have kids. My younger sister just graduated from an engineering program. When I quit my job, it was a little hard for my mom and grandparents to understand what I was doing, and at first they didn’t understand what I was learning to make myself happy and to love myself, as well as my trying to let go of traumas that they helped cause about my body and sex.

For the first year, they were upset about High Creatives, but now they are just like, “This is what Jacquie does.” They think it’s interesting, too. I like talking to my mom about sex. In a way, we can be the sex educators to our families. My mom was very shy, but I got her to open up, and now I really like having those conversations. We go to sex shops, she talks about what she likes, fantasies she has.

She knows that I smoke weed, which was also very difficult to her to understand. She watches the news in Spanish, where people are telling her that weed makes you act a certain way and it fucks up your life. But she sees me working hard every fucking day and she’s like, “You’re high?” It’s been a learning process, where I’m getting to know my mom in a way that I didn’t know when I was younger. 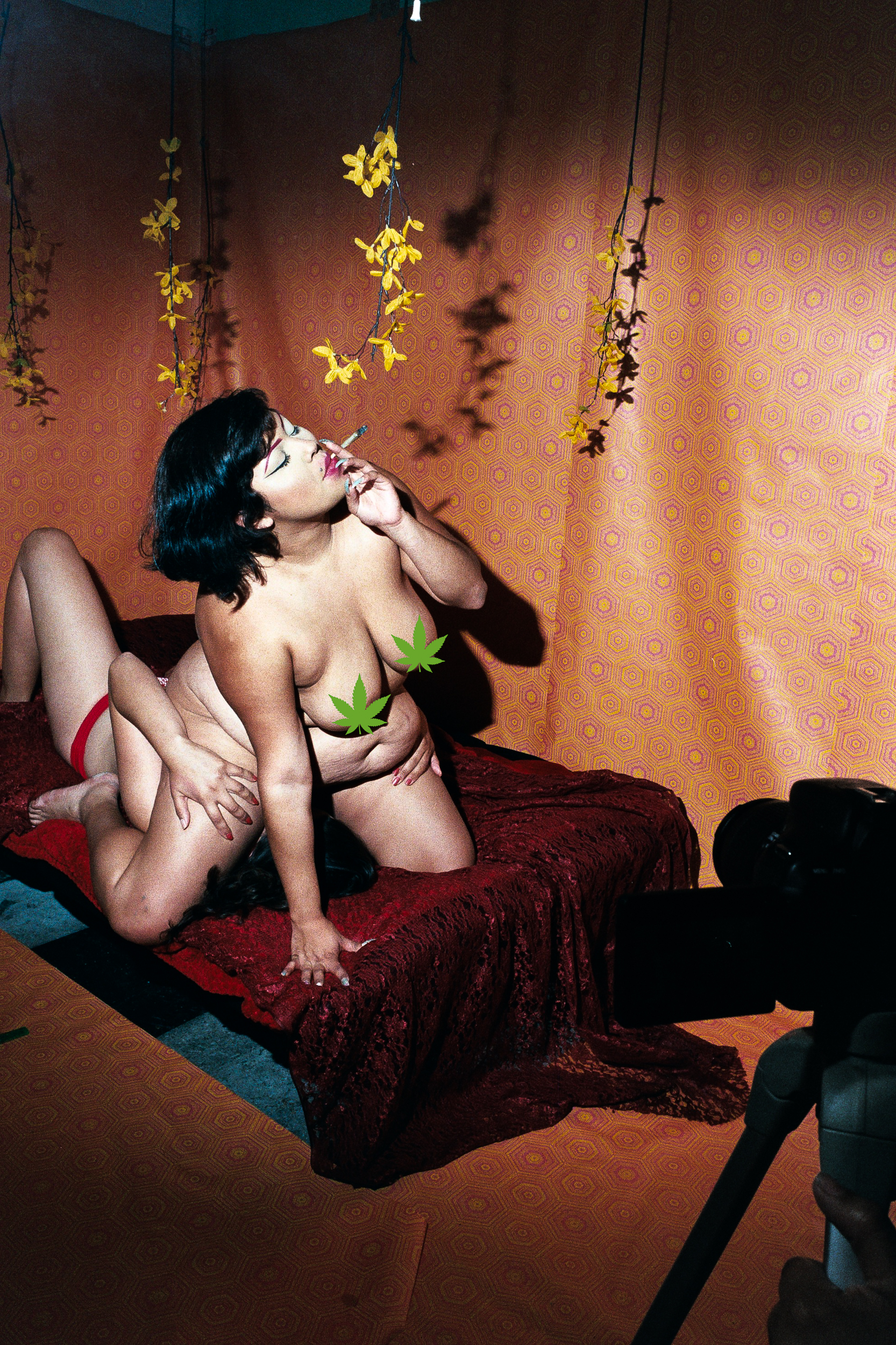 It’s been suggested that I make my own sex products, actually. But I also like [the brand] being a form of sexual education. I feel like there’s meaning to me, and what I’m creating through that is a source of sexual education that teaches people to be free and open with sexual desires. I want to expand. I like the film production side of things — I love being behind the camera and directing, but I feel like there’s more.

I want to start hosting monthly nights where queer people and people of color can meet and ask questions about sex while we smoke and learn from each other. I recently went to Paris to premiere one of my movies and host a workshop about sexual pleasures, and the latter turned into everyone talking about sex and how they felt in their relationships. I want to do something like that here in LA. 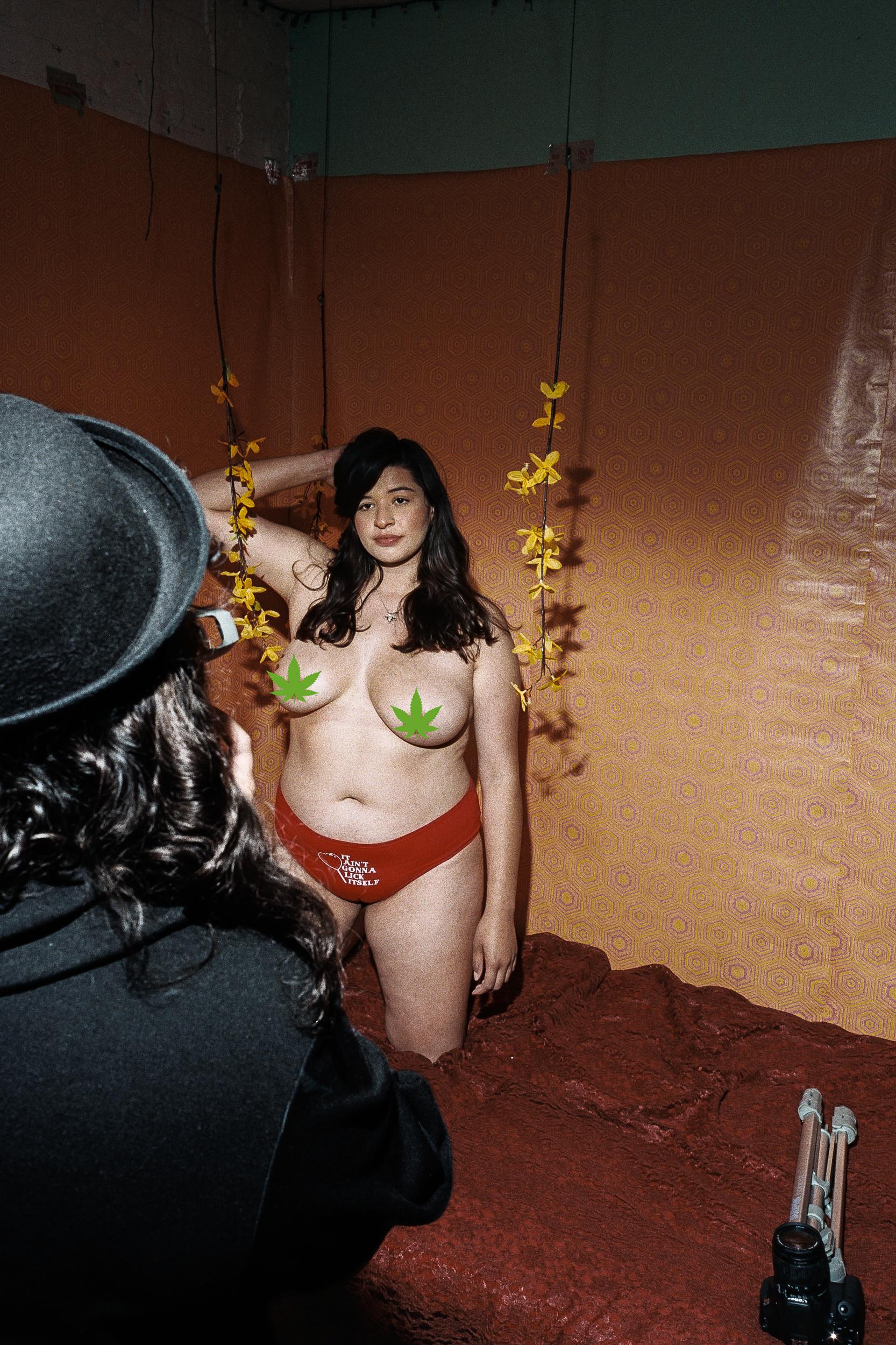 What’s in the future for High Creatives?

My series of erotica shorts will be about things that turn me on, things that I want to do sexually. They come from a place of being a chubby latina who’s afraid of showing their body and being sexual because of their past traumas and wanting to overcome that. Each story will have an illustration by a different artist. I also want to make a feature film with dialogue that addresses personal issues such as body dysmorphia. I’m also working on more merch, like T-shirts and tote bags. 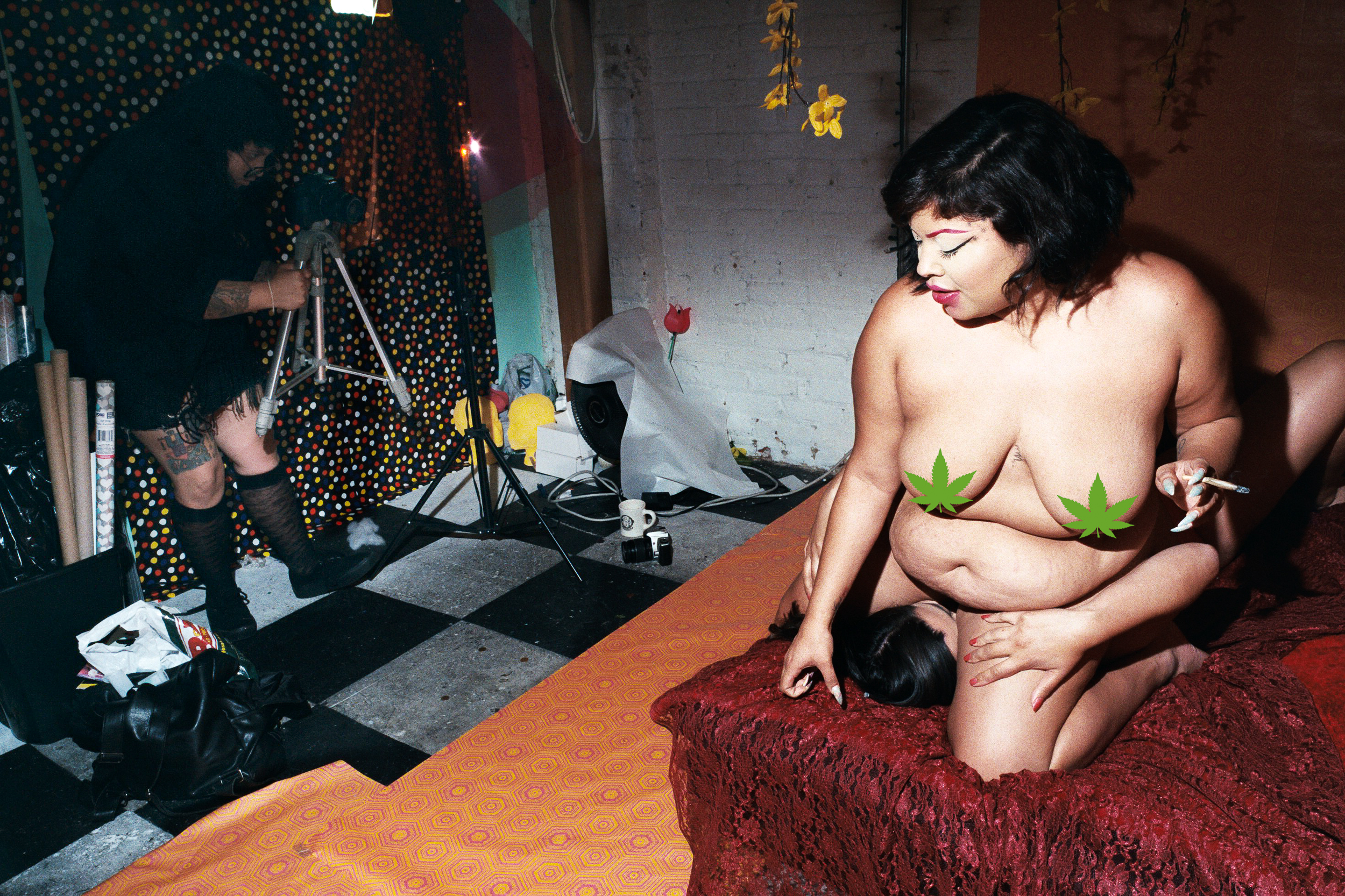 Will cannabis be involved in the future of High Creatives?

Yes, I’m starting a line of weed merch. High Creatives started because of my love for weed, so I’m planning to make HC rollers, joint papers, and grinders that have a sexual element but are intended for everyday use. It’s important for me to incorporate weed into my brand, because it makes me who I am.

I am very open on the internet about how much weed I smoke, and I always get comments from people who don’t understand that I am so productive when I’m high, and I’m high all the time. It’s not a big deal. I want to show that.