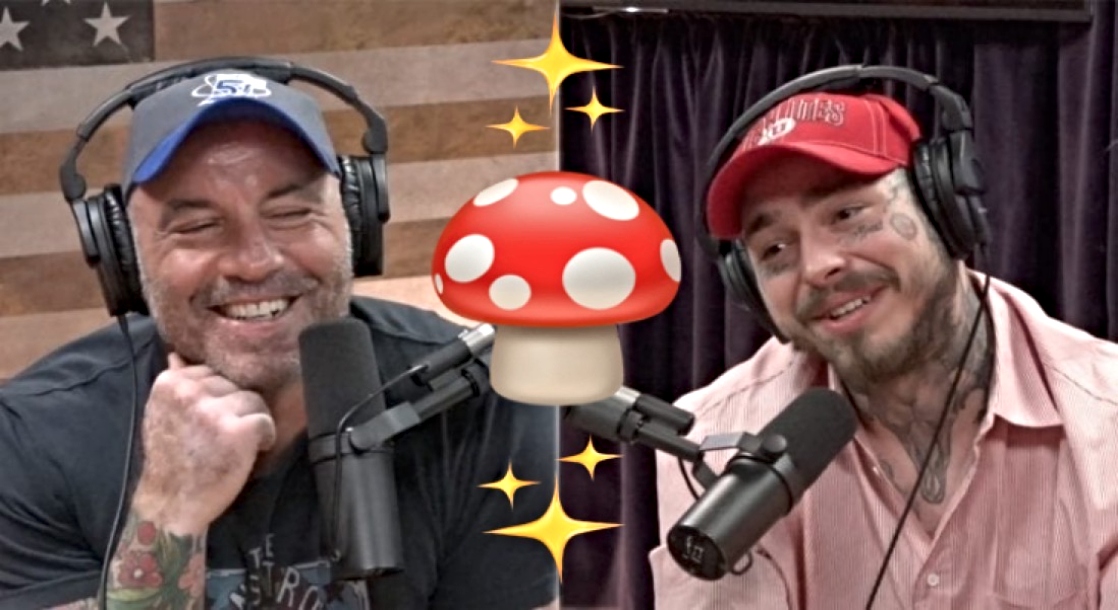 Hip-hop superstar Post Malone sat in on Joe Rogan’s podcast last week for an epic, psilocybin mushroom-fueled conversation that ranged from cannabis preferences to personal connections to conspiracy theories and other intoxicating topics over the course of three-and-a-half hours.

More than a thousand guests have gone mic-to-mic with Rogan thus far, but last week the Experience may have hit a new high — in every sense — when Post Malone turned on and dropped in with the assistance of shroom edibles.

“Yeah, haven’t slept, we’re on mushrooms,” Rogan said, kicking off the program. “And uh, let’s roll!” From there, the discussion seemed boundless — and it was. This was by far Rogan’s most psychedelic episode yet.

Early on, Rogan said he prefers pot to fungi because weed allows you to keep your feet on the ground a bit more easily than mushrooms. “If you do the right amount of mushrooms [and] get in a float tank, you can meet aliens,” he said. “That’s why I like weed, weed makes you vulnerable and for someone like me, that’s a good thing… Mushrooms are a different animal man. They just bring you to this weird place that’s like right next door. It’s like a hall pass to this other place, like you get a VIP bracelet, you get to go into another room.”

Malone agreed, saying he’s recently been “microdosing” mushrooms before creating music. He also brought up a “medium-intense” memory of a past UFO sighting.

“I’ve seen one,” the 25-year-old rapper said. “I was probably 16. I was in upstate New York and it would just stay there. I was looking out the window with my cousin and it was just a light that just stayed there and then just fuckin’ went off…I mean, you can’t explain it.” Malone added he’s since spotted unexplainable things flying around in the skies of Southern California and in Utah, where he currently lives.

The pair rambled on from that point about recent government disclosures regarding “off-road vehicles made not on this Earth,” along with ghosts (“They’re real,” Malone said), weather control, and who Rogan believes would be the ultimate podcast guest.

“I want to have an alien on the podcast,” Rogan said. “Can you imagine? Imagine having some three-foot tall, forty-pound dude with a giant, bulbous head and antenna-like fingers and he’s explaining how they traverse space and time instantaneously… Everyone would be like, ‘Oh my God, there’s an alien on the JRE!’”

The tripped-out talk additionally turned to terrestrial matters such as the current controversy surrounding mask regulations during the coronavirus pandemic. After saying it never feels good to be forced to do anything, Malone concluded, “At the end of the day, it all comes down to respect for other people… It’s not a government thing. You shouldn’t be forced to wear a mask— but you should. And that’s because I respect you as a fellow human.”

Since launching The Joe Rogan Experience in 2009, the podcast has skyrocketed in popularity. The reason is mostly because the comedian-turned-podcast host has mega-stars on his show — such as Elon Musk, Paul Stamets, Billy Corgan, and Lance Armstrong — and he’s extremely outspoken about cannabis, hallucinogens, and other mind-expanding phenomena. Rogan usually gets his guests to explore these topics with him all while getting stoned.