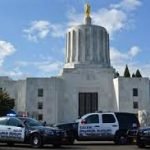 Police in Oregon are investigating a burglary ring that targeted cannabis businesses, the Oregonian reports. As part of the investigation, Portland and Salem police seized $33,000 in cash, 30 pounds of cannabis, six pounds of hash oil, 16 firearms, and burglary tools, along with clothing and other evidence from the victimized businesses, the report says.

Portland Police Assistant Chief Andrew Sherer said on Twitter that one arrest had been made in the case and there were “more to follow.” Officials have not released any other information, citing the ongoing investigation.

In a highly publicized 2019 case, Shadowbox Farms, located in Southeast Portland, was burglarized for about $1 million in products. No arrest has been made in that case.