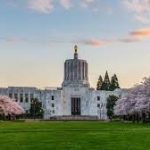 The  report goes on to say

State Michael Dembrow, a Democrat from Portland, said oversupply has left the state with enough marijuana to last nearly seven years. He said managing the amount of marijuana produced could prevent the product from slipping into the black market.

Senate Minority Leader Herman Baertschiger Jr., a Republican, said the state should instead let the free market dictate prices. He said the plan amounted to “socialism” and was “a stab at capitalism in pure form.”