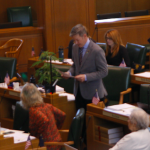 “In a bi-partisan vote of 42-17 on Tuesday, the Oregon House passed an historic measure that will allow Oregon’s Governor to enter into agreements with other consenting states to allow for the legal export of cannabis between state markets.  Governor Brown is expected to sign the bill.”

Now all they have to do is find states who’ll pass similar legislation so they can actually trade the commodity. Of course  other states may see that Oregon is the China of cannabis and dumping cheap product due to over production thus adversely affecting markets in other states. Early days yet, first the Gov has to sign.

In a bi-partisan vote of 42-17 on Tuesday, the Oregon House passed an historic measure that will allow Oregon’s Governor to enter into agreements with other consenting states to allow for the legal export of cannabis between state markets.  Governor Brown is expected to sign the bill.

Senator Floyd Prozanski, the bill’s sponsor, has been a champion of smart, rational cannabis policy in the Oregon legislature for more than two decades – and a key proponent of the concept.

“This is a very strong statement by the Oregon legislature, and one that will reverberate across the country,” says Sen. Prozanski. “The future of this industry is that cannabis will primarily be grown where it grows best, and most efficiently, and most sustainably. That’s what functioning legal markets do.”

The Oregon Retailers of Cannabis Association (ORCA) has been working with lawmakers to develop a bill to establish a framework for exporting cannabis since 2015.  A similar bill was introduced in the 2017 session, where it was voted on by the Senate Judiciary Committee and passed 3-2, but the bill never received a vote in the Senate and died. Last month, the Oregon Senate passed SB 582 in a 19-9 vote.

“This is a major paradigm shift for sure,” says Casey Houlihan, Executive Director of the Oregon Retailers of Cannabis Association (ORCA). “When we started the conversation around cannabis exports four years ago, this was not on the radar of most legislators.  But it’s really smart public policy – it’s important to our members, important for our state, and important for the future of the entire cannabis industry.  Passing this bill at this critical moment is a testament to the massive value for the industry in building strong relationships with legislators and working to educate our lawmakers in Salem.”

“The Emerald Region, from Oregon through Northern California, is one of the best and most important cannabis-producing regions in the world,” says Adam J. Smith, Founder and Executive Director of the Craft Cannabis Alliance, who also supported the bill. “In fact, this region has produced the majority of the nation’s domestic cannabis for generations.  As we move inexorably towards regulated markets, this bill brings us one step closer to sharing Oregon’s bounty, legally, with consumers everywhere.”

The bill contains a  “trigger” requiring that before the governor can enter into such an agreement, the federal government must allow such transfers in federal statute or indicate tolerance via a Department of Justice memo or policy directive. Seen as a long-shot before the session, the bill gained national attention as more and more states explore legalization policies. Under current conventions, every newly legal state must create a self-contained production industry, regardless of economic or environmental suitability.

Houlihan continued, “For years, most members of the legislature have been overwhelmed with implementing cannabis legalization. With the passage of this bill, Oregon’s lawmakers will likely factor in the many positive local impacts of our position as a global leader in cannabis production.”