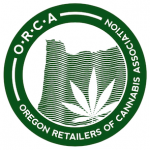 A quick rundown of some of the bills we’ve been tracking so far this year.

We’re extremely excited to announce that the bill that establishes the framework for cannabis exports passed out of committee last week, and is headed to the Oregon Senate floor. We have been working on this issue for five years, and its gratifying to see that attitudes have changed!

We owe our thanks to the Oregon Senate Judiciary Committee for their leadership on this issue and recommended “Do Pass” vote!

Special thanks also to the Craft Cannabis Alliance for their partnership on this issue, and Adam Smith’s incredible leadership in the capitol building.

If you are interested in following the bill as it continues,
you can follow this link to SB 582’s OLIS page.

For additional information on what exactly this policy will look like and what happens next, and to hear more about what you can do as members of ORCA to help shepherd this bill through the rest of the policymaking process, be sure to attend our upcoming meeting in Portland on April 29th!

2) Automatic Expunctions For Past Cannabis Offenses

This has been the least controversial bill we’ve worked on yet, and it just had a very successful public hearing late last week with a work session (and committee vote) scheduled for today. This one should get through.

3) Employment Protections for Off-Hours Cannabis Use

This bill just barely passed out of committee 4-3 after amendments were adopted to assuage the concerns of several key constituencies that felt this policy shouldn’t apply to them for safety reasons.  Now, the bill needs to get scheduled for a vote in front of the full Senate, which may be an uphill battle since the committee vote was so close.

This bill failed to get scheduled for a work session before the deadline, and so we will have to continue this fight next year – and we will.  No one should ever have to die because they choose to use cannabis.

Unfortunately, public health successfully rattled enough legislators for this to be perceived as controversial, and once again we were unable to schedule a work session before the deadline to move out of committee.