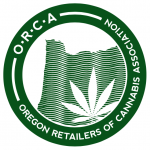 The Oregon Retailers of Cannabis Association have published their latest newsletter . and write.

Here’s a quick rundown of some of what we’ve been working on this session.

For more information about a bill – including where it’s located, when it’s scheduled for a hearing or work session, or who’s currently listed as a sponsor – please click the Bill Number for a link to that bill’s OLIS page.

[OLIS is the Oregon Legislative Information System is extremely helpful for tracking bills. Our staff uses it all the time – and you should, too!]

Description: Permits the Governor to enter into inter-governmental agreements with other governments to export cannabis out-of-state

Update – Progress continues in the behind-the-scenes conversations about how the technical language of this bill should be written.  All parties at the table still agree on the stated goals and we seem very close to having final language that should achieve what we all want. Of all the bills we are working on this year, this one still has the best chance of passing.

Advocates leading the fight in favor of these venues did all they could, and are working on making some strategic concessions to see what we can get from lawmakers this year.  It appears that the Indoor Clean Air Act exemptions are likely to be removed in an amendment, which removes the possibility of creating regulated indoor consumption spaces – but the bill does still have a lot of good content left.  It’s unclear if the amendments will temper the opposition, but we will know in the next few weeks.

We are working with a strong group of advocates under the umbrella of the New Revenue Coalition to work on the next steps of turning this concept into law.  Please visit the coalition’s website and add your support.

3) Employment Protections for Off-Hours Cannabis Use

UPDATE – We’ve recently been working with a group of stakeholders on this bill to address the concern, shared by many opponents of the bill (and laughed at by most others) that this legislation could be inherently unconstitutional, for reasons so silly they don’t even bear discussing.  The work group has, however, recently received an opinion from Legislative Counsel, stating unequivocally that they do not believe the bill should cause any constitutionality concerns.

The bill still has many powerful opponents, and we’re upsetting all of them.  But the Leg. Counsel opinion is another arrow in our quiver, and one less in theirs – so we’re going to see it through.  Stay tuned.

4) Automatic Expunctions For Past Cannabis Offenses

Update – This one is still one of the most broadly supported concept, and the bill is gaining traction as session continues on.  There are some technical challenges that may prevent this legislation from being as ‘sweeping’ in the automatic sense as we would prefer, but the Governor’s Office (and specifically her cannabis policy advisor Jeff Rhoades) have been tremendous allies in this fight for justice, and are working tireless to do everything in their power to fill in those gaps as best we can. This is an effort we should all be proud of. Expect to hear more news on this soon.

Update – After some shakeups on the House Healthcare Committee, this bill is likely going to be buried for this session after intense pushback from OHSU and some larger healthcare providers in the state who oppose any restrictions on decision-making criteria for their physicians as a rule.

We’re still going to keep fighting for this bill every chance we get – but at this rate, we may not get another chance to fight this fight in earnest until next year’s short session.

GENERAL LEGISLATIVE FEEDBACK: If you can, please take a moment and let Jesse Bontecou know what you think, what’s missing, and how you can help.

We will be updating you on our progress as legislation advances through the process – and there will definitely be several opportunities to get involved, provide testimony, attend additional lobbying events, etc. and we invite you to voice your support for all of these policy priorities if you so choose.

If you want to help ORCA pass these bills and fight the bad ones please become a member and add your voice to the fight. The more members we have the stronger we are!

You can sign up in less than a minute and membership starts at just $35.00 a month. You also get a bunch of other benefits!

Senate Bill 218 –  which would allows the OLCC to stop issuing production licenses based off of supply and demand analysis, is moving forward quickly.  Additionally, the OLCC’s Budget is being reviewed we hear that there is a lot of support for them to get more marijuana staff.

If you have questions about SB 218 or the OLCC budget please reach out to Jesse Bontecou.

The OLCC this week also issued what they are describing as a ‘compliance education bulletin’, aimed at improving the understanding that operators have about areas where rules require further clarification.

We strongly urge everyone to – just as the OLCC urges folks in the bulletin itself – READ THE FULL BULLETIN ONLINE HERE, NOW.

It’s clear from our reading that some of the clarifying information included in this bulletin is relevant to our members at ALL levels of the cannabis supply chain, and could impact how businesses are presently operating.

“For plain pre-rolls: Licensed Recreational Producers, Wholesalers, and Retailers may make non-infused pre-rolls under their license privileges. Starting April 1, 2019, there will be a new product category of “Non-Infused Pre-Rolls” in Metrc.

Items in this category will be created as count-based (“each”) items. When creating the items in Metrc you will be prompted to enter two additional values:

Any package you create of a non-infused pre-roll item will appear in Metrc as “each” and the weight per unit and weight of usable marijuana per unit created for the item will be associated with the package.”

[Again, the full report can be read online here.]

We will continue to work with the OLCC throughout the course of this year to ensure that we have a voice in the rule-making process.  Stay tuned!

OLCC & Hemp – The OLCC also released a significant Hemp Information Bulletin March 1st – if you are dealing with hemp read up.

1 in 4 Americans now lives in a state where cannabis is fully legal and 68% live in a state with medical cannabis. But there are a bunch of states working diligently to get on the adult use legalization train, but it is a tuff road even though polling is great!  That being said it is possible that by the end of 2020 over 50% of Americans will be living in states with legal recreational cannabis. Sounds like a great opportunity for legal export to me!

Alaska – As of March 12th Alaska became the first to State to legalize social consumption state wide. Their law would allow cannabis cafe’s and consumption in dispensaries. We hope Oregon Legislators follow suit and pass SB 639, we can’t let Alaska beat us.

California – While Alaska is the first state to legalize social consumption locations, cities across California are working hard to make sure their citizens have safe legal places to consume. In San Francisco the cafes are already booming. Oregon is not the only state dealing with licensing issues, 10,000 growers could lose their licenses unless their legislature grants them an extension.

Connecticut – Is working hard to jump on the legal adult use cannabis train this year. Their General Assembly is holding hearings today on two bills one to legalize sales to adults and the other to expunge criminal records for minor cannabis crimes. Lets keep our fingers crossed for them.

Illinois – With the Governor on board it appears that the question is not if but when Illinois will legalize adult use cannabis. That being said their legislature is wrestling and although they have bills to legalize a majority of House members just signed on to resolution to slow the legalization process. Additionally, there are a lot concerns about the industries ability to meet the demand if they legalize – We have a solution for that!

Maryland – Sadly it does not look like Maryland will be joining the legal adult use club this year, but they have formed bipartisan work group to figure out how to move forward with legalization in 2020.

Massachusetts – Legalization is moving along slowly but it is moving in th right direction. As of March 16th there are now 12 dispensaries in the state for a population of 6.9 million (as compared to our 628 stores for 4.1 million people)

Michigan – Cannabis in College – now it is not just what students do after class. Northern Michigan College has launched a four year degree in cannabis chemistry. Wouldn’t you love to see colleges and university in Oregon leading the charge on cannabis research and education? Contact your legislators!!!

New Hampshire – Is making strides towards legalization. this last month they passed bills out the House to legalize medical and adult use cannabis.  They did not have a huge majority but they are heading in the right direction for now!

New Jersey – Legislators will likely be voting on their bills to legalize cannabis this coming Monday, the 25th. Surprisingly, their Governor, who is a big supporter, doesn’t think they have the votes yet! He held a big press conference yesterday to try and generate more support. If you know anyone in New Jersey reach out and tell them to contact their legislators! If the bill passes cannabis lounges could be a reality on the East coast soon!

New Mexico – We had high hopes for New Mexico this year but alas it was not to be. Their efforts to legalize fell short but the governor is pushing hard for 2020!

New York – 2019 legalization in New York will almost certainly be decided today. Sadly it is not looking good right now despite a lot of support from the Governor. New York is a good indicator that cannabis is going to be a very significant issue in a lot of states in 2020! Additionally, New York demonstrated the tenor of debate, specifically around the demand for social and economic justice in the cannabis industry as a growing and significant issue!

Pennsylvania – A bill to legalize cannabis was introduce in the Senate this week and with the Governor and Lieutenant Governor supporting the effort things are looking good for 2019.

Vermont – Not to be out done by their neighbors, the Vermont Senate passed a bill to legalize cannabis sales. Its now in the hands of the House but we are hopeful they will pass it this year!

Cannabis legalization is definitely on a roll and picking up speed and states. The focus of the industry must now be to proactively shape policies and regulations on a post-prohibition landscape. We must all continue to be politically engaged to ensure that we get the actual industry we want when everything is said and done.

If you want to help ORCA do just that please become a member and add your voice to the fight.  You can sign up in less than a minute and membership starts at just $35.00 a month.