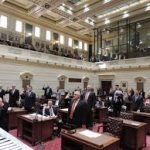 There are a raft of other considerations in the bill as well. Tulsaworld reports

OKLAHOMA CITY — A key piece of medical marijuana legislation survived the cut Thursday on the final day non-appropriation Senate bills could get third reading in the House of Representatives.

Those failing to get House approval by the final gavel Thursday afternoon are done for this session.

Senate Bill 1030, by Sen. Lonnie Paxton, R-Tuttle, is a much written-and-rewritten bill that sets the framework for municipal enforcement of the state’s medical marijuana laws. Its many provisions include instructions on how local law enforcement are to handle drivers in possession of marijuana without their medical marijuana licenses and limits on local zoning laws.

The bill also changes the tax structure for medical marijuana to eliminate most of the state sales tax on products. The 7% excise tax would be lowered to 6% and the 4.5% state sales tax to 1%. This gives local governments more room to add their own taxes.

“Any person who is convicted of possession of one and one-half (1½) ounces of marijuana or less shall be guilty of a misdemeanor punishable by only a fine not to exceed Four Hundred Dollars ($400.00). Any law enforcement officer who comes in contact with a person in violation of this subsection, and who is satisfied as to the identity of the person, as well as any other pertinent information the officer deems necessary, shall issue to the person a written citation containing a notice to answer the charge against the person in the appropriate court within ten (10) calendar days after the alleged violation. Upon receiving the written promise of the alleged violator to answer as specified in the citation, the officer shall release the person upon personal recognizance unless there has been a violation of another provision of law.”

“Any person producing proof to the court that a current state-issued medical marijuana license for the person was valid at the time of the alleged offense shall be entitled to dismissal of the charge. If proof of such license is presented to the court by no later than the business day preceding the first scheduled court appearance date, the dismissal shall be without payment of court costs.”