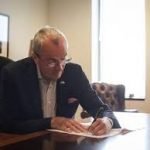 After various starts, stops, amendments and rewrites, a bill that would expand the New Jersey medical marijuana program is finally heading to Gov. Phil Murphy’s desk.

The Senate and Assembly on Thursday approved the Jake Honig Compassionate Use Medical Cannabis Act, a massive overhaul of the state’s medical marijuana program that would legalize edible forms of medical marijuana and increase the amount patients are allowed to purchase each month, from 2 ounces to 3 ounces.

The bill passed the Assembly by a 66-to-5 vote, with six abstentions. The Senate passed the bill by a 31-to-5 vote.

“The medicinal uses of marijuana have been proven safe for years, and yet, in New Jersey we have arbitrarily restricted patients’ access since our program’s inception,” said bill sponsor Sen. Joseph Vitale, D-Middlesex, in a statement.

Read the full report at  https://www.app.com/story/news/local/new-jersey/marijuana/2019/06/20/new-jersey-medical-marijuana-program-phil-murphy-legal-weed/1509946001/