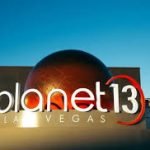 Or as the OC Register succinctly puts it, “‘Disneyland’ of marijuana dispensaries coming to Santa Ana Planet 13 is bringing its Vegas-style cannabis superstore and entertainment complex to California.” We imagine there must be plenty out there in CA who are thinking ..why did we even bother with prop 64 !

Here’s the OC Register and what they have to say

Planet 13 in Las Vegas has attracted international attention since it opened perhaps the world’s biggest marijuana store last fall, with 3,000 people shopping each day for newly legal cannabis products while surrounded by light shows and interactive art displays that feel natural a few miles off The Strip.

Now Planet 13 has announced that its second location — and likely the largest cannabis shop in California — will open early next year. And since it’s being billed as the “Disneyland of dispensaries,” it’s fitting that it’s opening just six miles from the theme park, in an industrial stretch of Santa Ana.

“It’ll have to be different than Vegas, of course,” said Larry Scheffler, co-CEO of Planet 13. “But it still has to be a destination, with different effects blended into the fabric of the Southern California lifestyle.”

The company, which is traded on the Canadian Stock Exchange, has been scouring locations from Santa Cruz to San Diego for months, according to Scheffler. Several key numbers sold them on Santa Ana.

Los Angeles, for example, is planning to initially license some 400 shops in a city of 4 million people, with neighboring L.A. County cities such as West Hollywood also allowing marijuana sales. But Santa Ana is the only city that permits marijuana shops out of 34 cities in Orange County. And with Santa Ana issuing just 30 licenses, there will be a maximum of 30 shops serving a county with more than 3 million residents and more than 50 million visitors each year.

Santa Ana residents voted to regulate and tax medical marijuana shops in November 2014. The city then held a lottery to award licenses to 20 businesses, which started opening in August 2015.