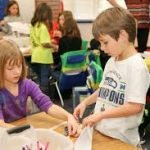 That approach includes sending every dollar generated by the 10 percent marijuana excise tax — which currently goes into the state’s rainy day fund — directly into the state’s public education account. That will provide a boost of $120 million over the next two years to the state’s education coffers. That proposal was introduced Tuesday as Senate Bill 545.

Currently, only the 15 percent wholesale tax that was enacted as part of the voter-approved initiative to legalize recreational marijuana in Nevada in 2016 goes into the state’s public education account. Senate Majority Leader Nicole Cannizzaro, D-Las Vegas, said that one of the most common issues brought to her by constituents is their desire to see all of the marijuana tax revenue, including that 10 percent excise tax, go towards education.

“That’s exactly what the bill that was introduced today will do,” Cannizarro said during a press conference Tuesday. “This is an impactful solution we can bring to the table today that will redirect more money to our students and teachers who deserve it.”