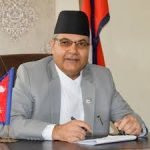 Lawmakers from Nepal’s ruling Communist Party have introduced legislation to legalize cannabis, the Associated Press reports. Birod Khatiwada, a member of the party, said the country’s terrain is suitable for cannabis cultivation and would be a boon to the agricultural economy.

“Marijuana has multiple uses,” Khatiwada, who represents the region that produces the most cannabis in Nepal, said in the PTI report. “It also helps earn foreign currencies and produce medicines.”

Gokul Baskota, spokesperson and Minister for Information and Communications Technology, said the government had yet to take any steps on the measure, which must be debated on and approved by Parliament.