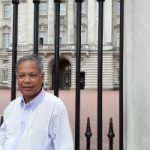 The Financial Post Reports…….“This company rented the land and is running its laboratory officially,” he said. “Their intention is to do research, not to sell or distribute. If their research goes well, they will work with the government.”

Myanmar’s anti-drug agency says Todoroki and two Myanmar citizens were arrested after police on Monday raided the plantation on an industrial estate in the country’s central Mandalay region.

Police said they were also seeking to arrest Alexander Skemp Todoroki. It’s unclear where the Todorokis, believed to be father and son, last lived in the U.S.

Thein Than Oo, who is general secretary of the Independent Lawyers Association of Myanmar, said Todoroki’s arrest could impact foreign investment, so the authorities should act with care. Myanmar was under socialist military rule from the 1960s through the 1980s, when it eschewed foreign investment despite being one of the region’s poorest countries. It is still struggling to make the transition to a full free-market economy.

“This is unfair,” said Aung Say Soe of Marijuana Legalization Movement Myanmar. “This American has already asked for permission from the government. It is like slapping down investment.”

Aung Say Soe also said it was obvious that the plantation was growing hemp, and that the difference from the type of marijuana used for getting high was easy to distinguish.

His bio reveals a more than impressive background. So, as always, the events/story are far more complicated than press reports initially revealed

Thein Oo holds a Bachelor’s degree and a Law degree from the Arts and Science University of Yangon, Myanmar, and has a Master’s degree in Human Rights from Mahidol University, Thailand.  In the May 1990 General Elections, he was elected as a Member of Parliament, representing Mandalay South-West as a candidate from the National League for Democracy (NLD) party led by Nobel Peace Laureate, Daw Aung San Suu Kyi.

Instead of transferring governing power to the elected civilian government, the military regime systematically undermined the democratic political process by arresting politicians, activists and Members of Parliament in the aftermath of the General Election.  As a result, many MPs fled Myanmar to the border regions in order to continue to fight for democratic rule and human rights inside the country. As exiled parliamentarians, he co-founded the National Coalition Government of the Union of Myanmar (NCGUB), the Government in Exile, on December 18th, 1990 in Kayin State, Myanmar.  From 1990 until 2006, he was a Minister of the NCGUB, acting in turn as Minister for Judicial Affairs, Minister for Human Rights Affairs, and Minister for Legal and Constitutional Affairs.

He was also elected as the Secretary of the Member of Parliament Union – Myanmar (MPU) on February 19th, 2008. The MPU was formed on June 15th, 1996, with greater participation from elected parliamentarians who had left Myanmar.

Under the oppressive military dictatorship, civilians were denied their basic rights. They suffered under unfair and oppressive laws, an arbitrary judicial system, and a lack of rule of law in Myanmar. In opposition to this, the Burma Lawyers’ Council (BLC) was founded as an independent organization on October 19th, 1994, by lawyers who have actively opposed the military dictatorship and who arrived in the revolutionary border areas before and after the Four Eights (8888) Uprising in 1988. He was the Chairman and co-Founder of the BLC.

He came back to Myanmar in November 2012 after an official invitation from the President’s Office and now he lives in Mandalay. He is a licensed lawyer (advocate) under Myanmar law.