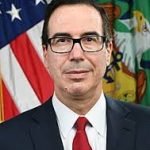 Treasury Secretary Steven Mnuchin advised against leveraging the 2017 tax law’s opportunity zone tax incentives to fund a marijuana business, even those that are legal at the state level.

Mnuchin told a Senate appropriations panel that such investments don’t line up with the intent of the capital gains tax breaks, which are for investors who fund development in designated census tracts, most of which are low-income. Sen. James Lankford (R-Okla.) raised the issue at the hearing May 15. Lankford said he didn’t believe such businesses should qualify.