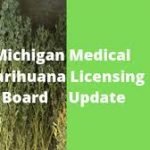 Just 10 days before the state plans to crack down on unlicensed medical marijuana shops, a state board approved a flurry of provisioning centers.

There are now 72 licensed medical marijuana provisioning centers, and about 50 unlicensed shops will face cease-and-desist letters from state officials after March 31, said David Harns, spokesman for the Department of Licensing and Regulatory Affairs. They’ve been allowed to temporarily operate without a license for the past year, selling untested weed grown by caregivers to patients.

The Thursday meeting of the Medical Marihuana Licensing Board is its second-to-last gathering before it disbands due to an executive order from Gov. Gretchen Whitmer. The governor decided to reorganize the oversight for medical marijuana business licensing, shifting the responsibility to staff and eliminating a board appointed by former Governor Rick Snyder.

Thursday, the board went about its business as usual, handling a hefty agenda of 96 business prequalifications and 29 license applications.

Andrew Brisbo, director of the Bureau of Marijuana Regulation, said he would be continually monitoring sales information in the state tracking system to determine when there is enough medical marijuana grown by licensed businesses to meet patient demand.

How Much Does a Gram of Weed Cost, Exactly?