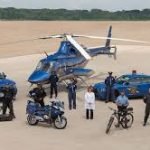 Here’s the introduction to their report

Now the 40 detectives and civilian analysts across the state will begin addressing illegal marijuana operations while continuing to aid the Marijuana Regulatory Agency in the licensing process.

The promised enforcement comes none too soon for licensed marijuana businesses, which have complained about facing unfair, illegal competition. Since the state legalized recreational marijuana in November, several unlicensed facilities have sprouted up without even trying to get licensed, said Detective 1st Lt. Chris Hawkins, commander for the section.

Unlicensed facilities and others that have operated temporarily during the transition to a licensed market have caused headaches for legitimate businesses such as Green Peak Industries, one of the state’s largest licensed medical marijuana businesses.

“It’s unclear where the black market ends and where the licensed industry begins at this point,” said Joe Neller, a spokesman for Green Peak. “The state should do everything to help law enforcement understand who’s legal and licensed and who’s not.”