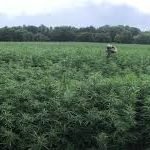 CHRISTIANSBURG — As the second year of commercial hemp begins in Virginia, growers face regulatory uncertainty and a rapidly evolving market.

Farmers are still processing the hemp they grew in the 2019 season, which marked the first year that people could legally grow hemp in the United States. Plenty of farmers added hemp to their existing farms, while other entrepreneurs with little experience in agriculture also crowded into the market.

That glut of hemp resulted in a bottleneck with processors, who turn the raw hemp into cannabidiol (CBD) oil. And with an excess of product, the price of hemp has dropped more than 75% over the last several months.

At the same time, the United States Department of Agriculture is still figuring out how to regulate hemp growers. The public comment period for the USDA’s draft regulations closed in late January. That’s left states like Virginia trying to figure out how to fill the regulatory vacuum in the interim.

The Virginia Department of Agriculture and Community Services has used the 0.3% THC standard since it first adopted regulations for hemp growers in 2015. Erin Williams, senior policy analyst at VDACS and coordinator of the agency’s efforts to implement hemp laws, said that’s because the 0.3% cap was written into statute in the 2014 and 2018 Farm Bills passed by Congress. The 2014 Farm Bill opened the door for hemp to be grown in partnership with universities for research, and the 2018 Farm Bill opened the door to commercial growers.

Since the 0.3% THC cap is written into federal statute, Virginia regulators aren’t likely to go with a higher cap until they see the USDA’s final rules, which could take months or even years.

In the meantime, Virginia applied on Jan. 15 to handle regulatory oversight of hemp producers, rather than having the USDA do so. The 2018 Farm Bill allows for this process of state oversight, but in sending its application, Virginia regulators did not want to jeopardize their chances of approval by floating a higher TCH cap. A General Assembly bill to raise allowable THC from 0.3% to 1% was carried over to 2021 for this reason.

So VDACS will move forward with much the same regulatory program it used in 2019.

“Our hope is that our program won’t look significantly different for growers than it did last year or during 2019 growing season,” Williams said.

In 2019, VDACS enforced the 0.3% THC limit, but did so through a sampling of producers instead of blanket testing.

Williams said VDACS collected 400 hemp samples from about 75 growers — at least one sample from every variety growing in production fields that were tested. About 18% tested “hot”—or over the 0.3% limit. That crop was destroyed.

The draft USDA regulations call for all hemp growers to be tested for THC content. In Virginia, that will mean sampling at nearly 1,300 registered growers, Williams said — a significant increase from the 75 tested in 2019. It’s unclear how that will be done; Williams said the USDA regulations leave the door open for third-party testers, but she added that VDACS was waiting for more information before deciding how it will move forward.

The General Assembly is continuing to consider bills that build additional regulatory frameworks for the hemp market. Del. Wendy Gooditis, D-Clarke, and Sen. David Marsden, D-Fairfax, are carrying administration bills directing VDACS to develop regulations establishing contaminant tolerances, labeling requirements and batch testing requirements for hemp products sold in stores, as well as directing the secretary of agriculture and forestry to figure out how to fund a long-term industrial hemp program.

“Someone’s got to do something to even out all these products and give the producers and the processors the guidelines so that they stay within the laws, so that they can get crop insurance and so that processors aren’t shut down for overstepping,” Gooditis said. “Everyone hates the word ‘regulation,’ but if we don’t regulate, we can’t support the growing industry.”