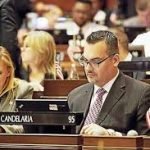 A key committee in the Connecticut legislature approved a bill to legalize marijuana on Monday.

The General Law Committee, which is one of two panels that heard testimony about legalization legislation last week, voted 10 to 8 to advance the bill.

Beyond legalizing cannabis for adult use, the legislation also includes a number of social equity provisions aimed at encouraging participation in the legal industry by individuals from communities that have been disproportionately impacted by the drug war. A governor-appointed commission would be charged with giving such individuals advance time to apply for a marijuana business license and promote diversity in hiring.

“At the end of the day, if we’re moving, it’s not about revenue. It’s about equity,” Rep. Juan Candelaria (D) said at the meeting. “It’s about ensuring that these communities that have been impacted, that we say we’re not going to stay idle anymore.”