A few days ago we reported breaking news on of Next Green Wave Holdings (OTC: NXGWF) (CSE: NGW), a company that we’ve covered since October of 2018. The company announced that it had acquired SD Cannabis for a cool $27 million.

We’ve all heard of big deals in the marijuana industry and it has helped propel countless marijuana stocks but what does this deal bring to the table for of Next Green Wave Holdings (OTC: NXGWF) (CSE: NGW)? In short: A LOT!

Who Is SD Cannabis?

It isn’t just industry expertise that Next Green Wave is going to immediately tapping into, there’s much more that could make this a turn-key transaction to add more value to the NGW bottom line. SD Cannabis brings 8 leading cannabis brands to the table along with 45 CBD and THC products that have a combined global social influencer reach of over 25 million people and with 100+ million YouTube views.

Where some cannabis companies may have a few branded influencers like music artists or tv hosts, SD Cannabis has 8, which include multiple partners deeply rooted in cannabis culture. Who’s behind some of these big brands?

Bring On The Big Brands

Carey Hart, former professional motocross rider and husband to multi-Grammy-winning artist Pink. Hart is the man behind HARTLUCK CBD PRODUCTS and with nearly 1 million followers on Instagram alone, you could say that brand exposure certainly isn’t a sticking point for them.

Other influencers include King Louie, a Grammy-nominated, up and coming hip hop artist

that was cited by Spin magazine for making Chicago the biggest hip-hop scene in 2012. He regularly works in collaboration and tours with artists like Kanye West and Chance the Rapper. Currently, in the recording studio, King Louie is expected to release the biggest album of his career in 2019 with major collaborations.  SD Cannabis teamed up with KL to produce high-end cannagars, flower packs, prerolls and CBD cigarette style rolls.

And the team includes artists as well. Sketchy Tank is an artist that started his illustrations as a blog and it quickly took off in the underground. Now the brand is widely recognized in the space with retailer Zumiez now carrying the Lurking Class line of clothing across their nearly 700 brick and mortar stores and online. SD is launching a line of cannabis products with Sketchy Tank including vape carts, premium flowers, and more.

of CBD products. Toy Machine has been building their reputation and acquiring a loyal fan base for over twenty years. The company, founded by Ed Templeton, is owned under distribution company Tum Yeto. Toy Machine is widely known for its alien-like graphics designed by Templeton.

There’s even a brand specifically designed for animals and YES there’s a major influencer on social media commanding a pack of TWO MILLION followers: Loki The Wolfdog. Loki Naturals is a pet line of CBD dog biscuits and tinctures specifically for pets. The brand’s founder, Kelly Lund has used his platform to bring awareness to key animal issues and has also partnered with some of the world’s largest brands including Toyota, Huckberry, REI and many others

the cannabis beverage industry.  Thorn St. Brewing made national news as the first craft brewery to infuse cannabis terpenes in beer in 2016. The Brew Bomb beverage has been formulated to be a water-soluble THC, in addition to CBD drops and drink mist.

Additional brands include OSSLA (OnSomeShitLA) and JunkyardLA. OSSLA started in a small BMX stop on Melrose Ave next to the famed BAIT store. In that shop, the team started to interview BMX pros and music celebrities while they were in town on their podcast called No Jumper podcast that quickly grew in following to well over 1 Million followers on Instagram. 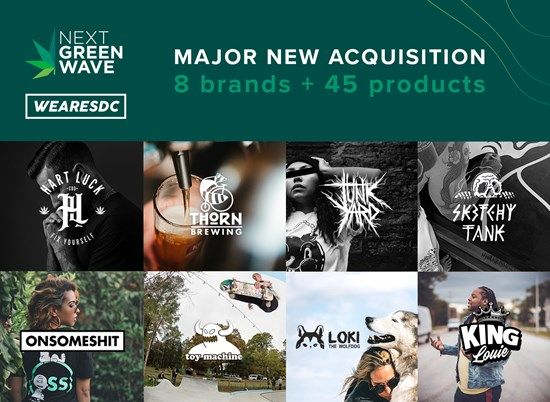 The team is well known now for breaking new Hip Hop acts. OSSLA focuses on premium flower grown in-house at its state of the art facility north of LA. Junkyard is an illustrator and street artist who was born and raised in South Africa now splitting his time between Chicago and LA.  His distinct style and passion for craft high end concentrates will fill a gap in the market as he teams up with SDC in 2019.

Major Brands backed by major influencers that Next Green Wave Holdings (OTC: NXGWF) (CSE: NGW) will now tap into at the start of what could become one of the biggest years for legal cannabis to date!  This acquisition not only brings larger potential retail flow but an influencer base that reaches into the tens of millions! If you ask why would NGW acquire such a company, we’re sure many would answer with, “Why Not?” especially with such a dynamic list of brands & brand influencers.

As the new Head of Next Green Wave Holdings (OTC: NXGWF) (CSE: NGW)’s Extraction and Manufacturing, SD also brings specialty extraction and manufacturing methods including ice water hash – the washing of the cannabis plant from whole plant fresh frozen material, rosin pressed from ice water hash and cannabis only terpenes that have a special process to end with a final result that has never been winterized.

According to NGW, these artisanal methods will have an immediate impact on new products that Next Green Wave Holdings (OTC: NXGWF) (CSE: NGW) will now bring to market… within the next three months. There are many companies doing many different things, however, a transaction such as this can bring everything under one roof & that could be big for NGW in our opinion.  We’re talking over 30 different types of extraction-based products across its 8 brand partners including everything from vape cartridges, rosins, ice water hash, tinctures, dog products, consumables as well as a number of CBD wellness and recovery products.