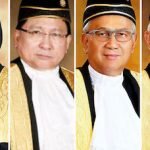 Instead, his charge has been reduced to one of possession of drugs.

The 38-year-old will now have to serve 15 years in jail and receive 10 strokes of the rotan.

He pleaded guilty to the lesser charge of possession of 1.1kg of cannabis.

Deputy public prosecutor Datuk Dusuki Mokhtar told the court that the prosecution had agreed to reduce Zaireen’s drug trafficking charge under Section 39B of the Dangerous Drugs Act and substitute it with Section 6 of the same law.

Prior to this, Zaireen’s lawyer had written in to the Attorney-General’s Chambers to review his drug trafficking charge, on grounds that there were no trafficking elements in his case.

According to the facts of the case, the police raided Zaireen’s home in Batu Pahat, Johor, in the early hours of Aug 27, 2014, following a tip-off.

During the raid at the top floor of a three-storey shophouse, they found several bottles of cannabis oil and a compressed lump of cannabis.

A chemist later confirmed that the seized items comprised 1.1kg of cannabis and 58.5ml of Tetrahydrocannabinol, a substance found in marijuana.

The Muar High Court sentenced Zaireen to death for trafficking in 2014, and the decision was upheld by the Court of Appeal.

However, Zaireen’s lawyer Kitson Foong said his client had never meant to harm anyone with the amount of cannabis in his possession.

“He was running a small therapy centre from home to give out appropriate amount of cannabis oil to those who had lost hope in getting their diseases cured by prescribed medicine. He only helped to alleviate the pain of patients in his village,” Foong said when mitigating.

He added that Zaireen’s marriage crumbled, while he was held in prison pending his trial and appeals, and he had also lost custody of his teenage son.

“We are urging the court to impose a minimum jail sentence so that he can return to society,” he said, adding that Zaireen had promised not to repeat the offence.