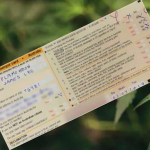 The former Busselton resident said he used the Therapeutic Goods Administration Traveller’s Exemption to bypass Australian bureaucracy, and claims to be the first Australian to have succeeded at the feat.

As he landed at Perth Airport Mr Plamondon, who usually resides in Thailand, said he ticked the box on his arrival card stating he was bringing “goods that may be prohibited or subject to restrictions”.

When asked if he was carrying medicines he answered they had been prescribed by a Thai medical practitioner.

He said he had “no issues” with customs officials when declaring the CBD oil he was carrying in his luggage and was waved through customs without having his bags examined.

The TGA’s Traveller’s Exemption allows travellers and their carers to bring up to three months worth of prescribed therapeutic goods for medical treatment into the country which would otherwise be listed as non-controlled substances.

The rules don’t specify the country of origin of the prescription, but they do require travellers to have accessed the drug through a pharmacist.

A spokesperson from the Australian Health Department confirmed that cannabis had been included in the exemption list in June 2017 and travellers bringing the drug into Australia under the above circumstances did not break federal regulations.

They said the Department of Health kept no record of the number of importations through the exemption but they said it was “unlikely” for Mr Plamondon to be the first citizen to do so.

Gaining access to the medication, however, can take up to several months.

It requires patients to get a prescription issued by a TGA and Western Australia Department of Health authorised specialist and, since the drugs are not included within the Pharmaceutical Benefits Scheme (PBS), they can come with a significant pricetag.

Mr Plamondon, who works as a marketing vice-president for the Thailand-based cannabis advocacy group Thai Cannabis Corporation, said despite efforts by the Australian government to streamline the application process, only 1 per cent of the country’s 3.24 million chronic pain sufferers were predicted to get access to the drug in 2019.

However, he said his success in legally importing cannabis opened the doors for Australian patients to bypass Australian prescription rules and outsource medicinal cannabis from countries such as Thailand.

“If they suffer from any of the 38 medical conditions for which Thailand’s doctors can prescribe cannabis – including chronic pain – then they can visit Thailand and bring home a three-month supply of Thai-prescribed and Thai-legal medical cannabis declaring it to Australian customs and claiming it under the Traveller’s Exemption as I did,” he said.

Although the recreational use of cannabis in Thailand remains illegal, recent Thai legislation changes allow for registered patients to posses certain amounts of cannabis if they have a prescription from a licensed doctor, dentist or traditional medical practitioner.

Thai practitioners are allowed to prescribe medicinal cannabis to treat 38 medical conditions, including some of those endorsed by the TGA such as epilepsy, chronic pain and cancer.

A passionate cannabis advocate, Mr Plamondon is now urging the government to cut the red tape surrounding the drug and to include GPs to the list of accredited practitioners who can prescribe it.

“It’s time for Australia’s government to give Australian battlers a fair go at medical cannabis by making cannabis as easy for family GPs to prescribe as codeine, and as easy for pharmacists to supply,” he said.

“Until then the only legal hope for millions of Australian chronic pain patients is the ‘Thailand twist’.”