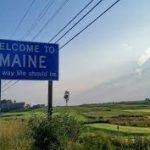 The firm writes, ” As of 5:30 this morning, the adult use marijuana rules had been approved by the Maine State Legislature and were headed to the Governor’s desk for her signature. The rules will go into effect in 90 days, assuming the Governor signs the bill today. Our best guess is that license applications will become available in October/November 2019, and Drummond Woodsum’s Regulated Substances Group will continue to send updates.
Additionally, on June 18, 2019, the Governor signed into law an emergency bill increasing the amount of marijuana and marijuana products that a caregiver may wholesale to other caregivers and dispensaries from 30% of annual yield to 75% of annual yield. We will be sending information about additional developments relevant to the hemp and marijuana markets next week.”
Also read the Press Herald Report

It brings Maine one major step closer to its first legal recreational sales, which regulators estimate could occur in March 2020 – after the state’s tracking and licensing systems are ready, marijuana businesses get state and local licenses and growers have product ready to hit the shelves.

In its budget forecast, Maine is banking on $22 million in adult-use sales in the first three and a half months after the market’s launch. The state is expecting those numbers to grow, from about $84 million in its first full year, fiscal year 2020-21, to $166 million in 2022-23.

With a 10 percent sales tax, and a 10 percent excise tax, Maine is expecting to collect about $4.4 million in taxes from marijuana sales by June 2020, the end of the fiscal year, according to David Heidrich, a spokesman for the Maine Office of Marijuana Policy.

In fiscal year 2023, Maine is banking on $33.2 million in marijuana taxes, based on revenue forecasts.

National consultants believe Maine’s overall in-state marijuana market will be even higher, between $227 million and $396 million a year within a few years. Some of those dollars will be spent in Maine’s $65-million-a-year medical market, while others will end up in the black market, especially in parts of Maine that prohibit local marijuana retailers.