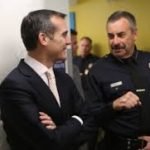 Wednesday, Los Angeles Mayor Eric Garcetti said he may ask for an increase in police and enforcement funding to shut down all the unlicensed, illegally operating pot shops in the city.

Why would a city that has legalized recreational marijuana consider a potential tenfold jump in police spending—from $3 million to $30 million—aimed at prosecuting marijuana offenders? Because L.A.’s regulations are so difficult to comply with that the city remains full of illegal pot businesses. Local media outlet The Hubnotes that while there are 178 legal pot shops in Los Angeles, the city has gone after more than 100 illegally operating shops and the city’s attorney has filed criminal charges against more than 500 defendants across a nine-month period.

Two big factors are contributing to this outcome. First, California’s legalization came with huge taxation authorities, and the cities that are allowing legal marijuana sales are also heavily taxing the industry in the hopes of raking in revenue. If you buy marijuana legally in Los Angeles, state and local taxes and fees add nearly 35 percent to the cost. Legal marijuana in Los Angeles actually costs more than it does in San Francisco, thanks to a 10 percent local excise tax.

The second factor, seemingly ignored by Garcetti in his call for a crackdown, is that L.A. has done a terrible job setting up the bureaucracy that allows people to get licenses to legally operate. The Los Angeles Times reported in February that people who have tried to open their shops legally have been thwarted by bureaucratic slow-rolling. Many applicants have been waiting for more than a year for permission to open their stores. Some have just given up and gone elsewhere. Others are simply taking advantage of the demand and the city’s inability to consistently control the market and operating unlicensed storefronts.