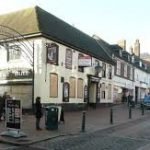 You’ll have to forgive us for relaying this rather useless piece of information, but a part of CLR’s mis-spent youth was around the area and if you know Sittingbourne you’ll find the humour in this excitable article by Kent Live.

Something has finally happened in Sittingbourne

Where else would Britain’s biggest cannabis farm be but in ‘The Garden of England’?

The farm is run by GW Pharmaceuticals, where around two million cannabis plants have been produced since its opening in 1998.

It’s location was previously regarded as a secret.

But it was good news for the Sittingbourne-based farm when, last year, medical cannabis became legal for doctors to prescribe in cases of exceptional clinical need.

Those suffering from epilepsy, nausea and chronic pain due to chemotherapy are now given the option to get the drug on prescription, reports The Mirror .

Those suffering from epilepsy, nausea and chronic pain due to chemotherapy could all be given the option to get the drug on prescription.

But not everyone suffering from these conditions will be able to access it.